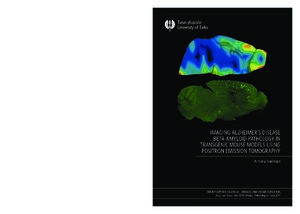 Accumulation of beta-amyloid (Aβ) in the brain is known to have an important role in the complex chain of pathological events leading to Alzheimer’s disease (AD). Based on current knowledge, Aβ is also seen as an interesting target for novel disease modifying therapies. Non-invasive and quantitative imaging of transgenic mouse models of AD by positron emission tomography (PET) would represent an ideal translational approach for evaluation of novel Aβ targeted therapeutics in vivo already during the preclinical phase of drug development.

The aim of this thesis was to evaluate the suitability of Aβ targeted PET tracers, 11C-PIB and 18F-flutemetamol, for small animal PET imaging and for longitudinal follow-up of β-amyloidosis in three AD mouse models, i.e. transgenic APP23, Tg2576 and APPswe-PS1dE9 mice. In addition, the effect of novel functionalized Aβ targeted nanoliposomes, known as mApoE-PA-LIPs, were investigated in APP23 mice exploiting longitudinal 11C-PIB PET imaging.

A temporal increase in tracer retention reflecting increased Aβ-deposition could be detected in vivo only in the APP23 mouse model. Both tracers specifically bound Aβ in mouse brain sections, however, the higher non-specific binding of [18F]flutemetamol to the white matter structures limited its sensitivity in comparison to 11C-PIB. In the APP23 model, the mApoE-PA-LIP treatment showed a trend to reduce the increase in the 11C-PIB binding ratios as compared to the saline-treated group; in addition, the binding ratios correlated well with the histologically-assessed amyloid load, further validating the method.

In summary, these results demonstrate that 11C-PIB binding is a valid biomarker of Aβ deposition in the APP23 mouse – an animal model that expresses abundant, large and congophilic Aβ deposits. However, the sensitivity of the method is not sufficient for use in animal models with lower plaque loads and different plaque morphologies, nor does it seem capable of detecting early pathological changes in young AD mice.