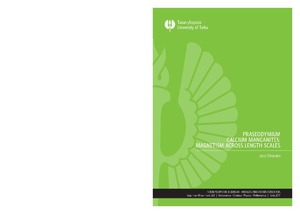 In this work, the methods of experimental and computational material physics are employed to describe and explain the magnetic phase diagram of Pr1−xCaxMnO3, a particular family of perovskite-structured manganites (here-after PCMO) perhaps most famous for its prominent colossal magnetoresistivity effect. After introducing the basic structural and magnetic properties of perovskite manganites and ﬁnally the macroscopic magnetic phase diagram of PCMO, the microscopic mechanisms at the origin of the directly observable macroscopic phases of PCMO are identiﬁed and modeled.

The experimental research was largely based on ceramic samples synthesized by the traditional solid state method. The highly crystalline samples were readily characterized by diffractometric methods, including x-ray and neutron diffraction assisted by Rietveld reﬁnement, and bulk magnetometry down to the liquid helium temperature. Thus, experimental correlations between the structural and magnetic properties of PCMO could be established. Structural problems only arose at the highest of Ca concentrations, at x ≥ 0.8, where a structural phase separation and a thermodynamic preference for severe oxygen understoichiometry were veriﬁed.

At x ≤ 0.8, a consistent description of the magnetic phase diagram was achieved based on a microscopic dynamic equilibrium between only two magnetic phases, signiﬁcantly extending the range of applicability of such a framework for PCMO. The phase equilibrium was characterized via several distinct observations of structural transitions and exotic magnetization dynamics, and ﬁnally modeled by Monte Carlo simulations capable of reproducing the magnetic hysteresis of PCMO, including the metamagnetic transition related to the colossal magnetoresistance effect. As a natural byproduct of analyzing the magnetic transitions, entropy-based estimates for the magnetocaloric applicability of PCMO were also obtained. The estimated refrigerant capacities placed the 100 K performance of PCMO on par with the room temperature ﬁgures of some of the best Gd-based magnetocaloric alloys.