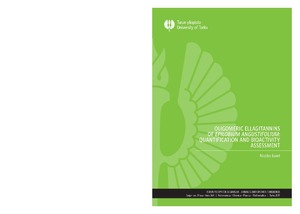 Over the past few years there has been a growing body of evidence highlighting the fact that tannin-rich fodders could be beneficial to animal welfare as well as to the environment, by decreasing methane emissions from ruminants. However, the immense variety of tannin structures that exist within the plant kingdom has rendered difficult the study of their precise modes of action. Yet, understanding the structure-activity relationships that underlie the bioactivities of tannins would permit a targeted selection of optimal forages and thereby a more effective use of these natural resources. This work focuses on one particular aspect of the structure-activity relationships of ellagitannins: the degree of oligomerization. A series of oligomeric ellagitannins (ETs) isolated form fireweed (Epilobium angustifolium) was utilized to address the question of how the oligomeric size might affect the bioactivities of ellagitannins.

First, a method was developed to quantify these ETs using ultra-high performance liquid chromatography-diode array detector-tandem mass spectrometry (UHPLC-DAD-MS/MS). This method was then applied to investigate the distribution pattern of ETs and other phenolics within the plant and among several plant populations. Substantial differences were observed between leaves, flowers and stems but the interpopulational variability remained relatively low. The second part of this work was dedicated to the assessment of the relationships between oligomer size and bioactivity using in vitro assays. Oligomeric ETs were tested on an in vitro model of ruminal fermentation and on the adult stage of an intestinal nematode of goats and sheep. It was found that oligomeric ETs inhibited fiber degradation in a size-dependent manner. Their ability to specifically inhibit methanogenesis and protein degradation, however, reached an optimum with the trimer and the tetramer. The same optimum was also observed with the in vitro anthelmintic activity.