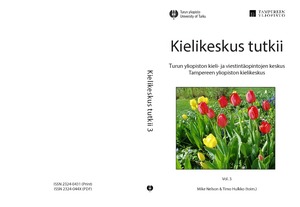 This edition of Kielikeskus tutkii is now the third of the series that began in 2013. It was our aim from the beginning that the journal would become a permanent fixture in the daily life of our Language Centre. This 2017 edition marks a significant development in that it has been produced in collaboration with the University of Tampere Language Centre. After the publication of our last journal in 2015, talks began with teachers from Tampere with an eye to initiating some form of collaboration. What began as informal discussion, soon progressed into serious discussion on somehow working together to create a joint journal. Concrete work began with a meeting in May 2016, when we discussed initial ideas and possible partnerships between teachers. This progressed through a number of Skype meetings and the use of a joint Moodle site. The same processes we have always used in terms of feedback and peer support worked, we found, equally well despite the distance between us. What you see today is the result of this collaboration with both articles by individual staff members and also one Turku/Tampere joint article.

A lot has happened in the intervening years since the first edition, both in Turku and in Tampere. In these times of change, in Turku all language teaching has been centralized to form a new unit out of five previous institutions, whilst in Tampere work on the Tampere 3 project has continued. Despite all these changes and the uncertainty they arouse, certain things have remained constant. One of these constants has been the interest and perceived need in research within a language centre context. It is our joint mission to produce research-informed teaching and the classroom-based research that you can find in this volume relates directly to this core mission. The articles show life in the language centre through a wide-angle lens, but two common themes run through the articles: the all-pervasive use of digital technology and notions of student autonomy.

The first article by Alakastari and Valkama is a comparative analysis that examines the effect of different levels of support on the writing of Bachelor’s level Swedish tests. The support could be both traditional (dictionaries) or electronic and they look at the impact of support on word choice, noun and verb usage, accuracy and other related issues. Alanen and Männikkö continue the theme of analysis of Swedish language teaching and learning, focusing on teaching development from the perspective of the assessment of video-recorded oral presentations. The aim of their article was to identify those features that contribute to a successful oral presentation at CEFR B1 and B2 level. They then discuss whether, once identified, these features could be used as assessment criteria. Gamache and Horton investigate how students use online tools to improve their writing skills in English. They also focus on how their perception of these tools can help or hinder their use of them. By elucidating students’ perceptions in this area, they hope to identify key pedagogical approaches for teachers to use in graduate classes.

Hildén’s article differs from the other articles in this edition of the journal in that it is not concerned directly with language but rather looks at language centres from an administrative and historical perspective, thus providing a new dimension to the journal. Hildén examines the way in which language centres have been managed and organized since their inception and charts the significant changes that have occurred. He focuses on how the changes in the law governing universities have affected language centres both internally and also their role and standing as part of the university they belong to.

Hollingsworth raises fundamental questions that all teachers face: ‘What have my students learnt? Have they learnt what I think I taught them? Is it all worthwhile? … What have they retained? Have they made any use of the materials I lovingly crafted or the feedback I spent hours writing?’ In this questionnaire-based study, Hollingsworth attempts to answer these questions and examines the role of using a European Language Portfolio and other electronic tools in the retention of learning. In her article, Who owns guided self-study? Jokinen examines the issue of ownership of learning by asking students of German what significance the self-study parts of their course had for them, how they used the freedom they were given and to what extent the self-study parts of the course served the transfer of learning ‘ownership’ from the teacher to the students.

The article written by Laivo-Laakso and Tuuri is a joint Turku-Tampere production and focuses on peer feedback in a Finnish writing skills context. In particular it examines the significance of peer feedback given between students on writing courses: what kind of support has been given to students who give feedback and what kind of needs and expectations they have. They consider whether giving feedback could be a transferrable skill and what factors are involved in enabling students to benefit from these skills outside a formal classroom setting. Nelson conducted a nationwide survey across all Finnish language centres, linked to the ongoing Finelc 2digi project, examining the role that digital literacy plays both in the classroom and language centre curricula. The survey confirms that the notion of digital literacy is still an unclear concept to many language teachers and that work needs to be done to clarify it at an individual and institutional level. The article concludes with suggestions for developing digital literacy skills.

In the final article, Palmer examines learner autonomy in the context of portfolio usage: students were given the freedom to choose what they included in the final portfolio of an English for Academic and Professional Skills course. Palmer refers to these as ‘mix and match’ portfolios. She reports on students’ reactions to using this kind of portfolio as opposed to the more traditional pre-given format portfolio and what impact this had on their feelings of autonomy.

Finally, I would like to warmly thank all those who worked so hard to make this journal happen again. It has shown that fruitful cooperation between language centres is both possible and that obstacles created by geography can be overcome. We hope you enjoy this edition wherever you may be.