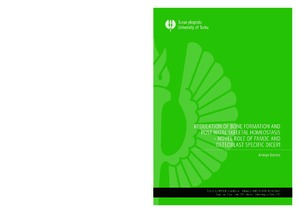 Development of the skeletal system comprises of two major biological processes namely, endochondral ossification and intramembranous ossification. Mesenchymal stromal cells give rise into bone forming osteoblasts, which undergo maturation and mineralization to form bone. Osteoblast differentiation is an intricately regulated process which involves multitude of factors including transcription factors, cytokines, growth factors, microRNAs and functional proteins. A detailed understanding of the molecular mechanisms of osteoblast differentiation and bone formation is essential for the development of novel therapeutic approaches to counter skeletal disorders such as osteoporosis. This thesis combines work on two aspects of bone biology namely, the novel role of Fam3c and osteoblast specific Dicer1 in the regulation of cortical bone formation and post-natal skeletal homeostasis.

Genome wide association studies are studies, which involve large number of individuals and look at genetic variants of individuals to examine their association with different phenotypic traits. In multiple genome wide association studies on independent population cohorts, a novel protein Fam3c (family with sequence similarity 3, member C) was predicted to be associated with bone mineral density at different anatomical locations and fracture risk. However, the role of Fam3c in bone biology was relatively unknown prior to the commencement of this work. First aim of this thesis was to decipher the role of Fam3c in bone biology and to establish its molecular mechanism of action. Fam3c was found to have a multi-faceted role in the regulation of osteogenic differentiation, bone mineral density as well as cortical bone structure. Additionally, in vitro experiments revealed that Fam3c may exert its action via the down-regulation of transcription factor Runx2 in osteoblasts.

MicroRNAs are short (approx. 22 nt) non-coding RNA molecules which negatively regulate gene expression. Dicer1 enzyme is crucial for the processing of pre-miRNAs to mature microRNAs. MicroRNA mediated gene regulation has been established to be a critical part of regulation of a variety of cellular processes including osteoblast differentiation and bone remodelling. However, it was incompletely known whether microRNAs play a role in the maintenance of post-natal bone homeostasis. The second aim of this thesis was to examine whether Dicer1 inactivation and, thus, blocking formation of active miRNAs in bone forming cells affects post-natal bone homeostasis. A novel mouse model was generated (Dicerosx), in which Dicer1 can be inactivated in a time-controlled manner in osterix-expressing bone forming cells. Inactivation of Dicer1 led to dysregulation of post-natal cortical bone formation. Moreover, biomechanical testing revealed increased ductility among the Dicer1 deleted bone samples as compared to the controls.