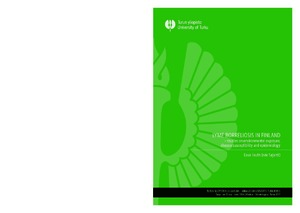 Lyme borreliosis is the most common tick-borne infectious disease in Europe and North America. It is caused by the spirochetes belonging to the Borrelia burgdorferi sensu latocomplex. The bacteria are transmitted to humans by the hard ticks of the genus Ixodes, of which I. ricinus and I. persulcatus are present in Europe, including Finland. The first manifestation in the early phase of the infection is a red skin rash called erythema migrans. The manifestations of the disseminated disease vary from neurological symptoms to arthritis, chronic skin lesion, and on rare occasions to cardiac conduction disorders. The annual number of Lyme borreliosis cases has increased significantly during past decades in many European countries, the US, and Canada. At the same time, the abundance of vector ticks has increased and the geographical distribution has expanded towards northern latitudes in many studied areas such as Sweden, Russia and Canada.

The wide focus of this study targeted to investigate the tick distribution and associated pathogens in Finland, the epidemiology and seroprevalence of Lyme borreliosis, and host-related factors that increase susceptibility to the disseminated infection. According to our results, both I. ricinus and I. persulcatus are widely abundant in Finland, and approximately 16.9% of the ticks are infected with B. burgdorferi sensu lato. The incidence of Lyme borreliosis has increased significantly during the past two decades, and we estimated the total number of cases at present to be 6 000−7 000 yearly. Seroprevalence in the general Finnish population is 3.9%, with a higher prevalence occurring in males. No associations between chronic diseases (such as pulmonary diseases, autoimmune diseases, or cancer) and B. burgdorferi seropositivity were found in our study. Instead, deficiency in the lectin pathway of the complement seems to increase the susceptibility to disseminated Lyme borreliosis. These findings indicate that LB is an increasing public health concern in Finland, reflecting the situation in northern Europe in general.