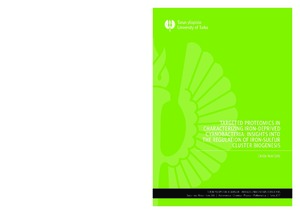 Cyanobacteria comprise a diverse group of widely distributed gram‐negative bacteria, which have the unique capacity amongst prokaryotes to perform oxygenic photosynthesis. Acclimation to iron deprivation, a key theme in this Thesis, involves several metabolic changes, which are closely interlinked with the high demand for iron cofactors in the photosynthetic electron transfer chains of these organisms. In order to gain in‐depth information on the protein-level changes occurring under iron deprivation, a targeted MS‐based proteomics method, selected reaction monitoring (SRM), was developed for the cyanobacterial model species Synechocystis sp. PCC 6803. Altogether 106 proteins were selected as SRM‐target proteins, representing various key metabolic pathways and possible metabolic nodes linked with iron‐dependent enzymatic reactions. The SRM analysis resulted in a high‐quality dataset, which verified several responses to iron deprivation, such as those related to remodeling of photosynthetic apparatus and induction of several iron acquisition proteins. New information was obtained, for example, on the elevated levels of proteins acting as electron sinks to alleviate the overreduction of the photosynthetic electron transfer chain caused by the increase in Photosystem II to Photosystem I ratio under iron deprivation. As a demonstration of the sensitivity of the system, 64 of the quantified target proteins had not been detected in earlier discovery‐based proteomics assays.

The validated SRM method was subsequently applied to study the regulation of iron‐sulfur biogenesis in Synechocystis sufR and isaR1 mutant strains. SufR has been characterized as a transcriptional repressor of the sufBCDS operon, which is responsible of the Fe‐S cluster biogenesis in cyanobacteria. Deletion of sufR caused drastic induction of the sufBCDS operon proteins under Fe‐sufficiency, while the proteins carrying Fe‐S cofactors were downregulated. Under extended Fe‐depletion, increased expression of the apo‐form Fe‐S proteins was observed in comparison to the wild type strain under the same conditions. IsaR1, a small regulatory RNA, was found to be responsible for the repression of several genes for Fe and Fe‐S proteins as well as tetrapyrrole biosynthesis genes under Fe‐deprivation. Hence, IsaR1 affects the photosynthetic apparatus both directly and indirectly upon acclimation to iron deprivation. Importantly, both SufR (transcriptional repressor protein) and IsaR1 (small regulatory RNA) were identified to repress the sufBCDS operon; SufR under Fe‐sufficiency and IsaR1 under Fe‐deprivation. Such complex mixed regulatory circuit highlights the importance of tight control over the biogenesis of Fe‐S clusters as part of the metabolic acclimation to varying iron conditions.