The European Parliament in EU External Relations : The Case of Ukraine and beyond

The European Parliament in EU External Relations : The Case of Ukraine and beyond 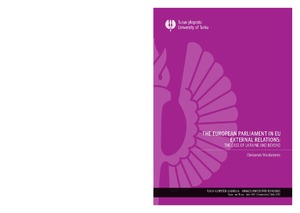 European integration has principally been an instrument of security policy with its primary objective to prevent a war in Europe. Due to the success of the EU project, this goal has been achieved. However, it is the EU own neighbourhood that has become the source of instability. The Lisbon Treaty has preserved the “second pillar” via special rules for the Common Foreign and Security Policy. Despite the limited competences for the European Parliament for this policy area, the post-Lisbon practice has revealed that its actual role has been far more diverse and extensive that the Lisbon Treaty suggested.

This research provides a study of the role that the European Parliament has been playing in the EU external relations of the post-Lisbon period. With reference to the case-study of EU-Ukraine relations, this research demonstrates the growing role that the European Parliament has been playing concerning the security aspects of the EU foreign policy. The research is conducted at two levels. At the empirical level, it focuses on the case of EU-Ukraine relations. At the analytical level, the research is aimed at placing the empirical results into the wider context of the post-Lisbon evolution of the European Parliament, with particular focus on its role with regard to the CFSP.

From the legal perspective, this dissertation is aimed at providing the insight into the instruments and mechanisms utilised for the post-Lisbon transformation of the Parliament’s role for EU external relations. This study is inter-disciplinary. The general methodological approaches affecting this research can be referred to as “law and political science”. The research has been influenced by the ideas of constitutionalism and social constructivism. However, the major theoretical framework that this research utilises is new institutionalism.

Summarising the findings of this dissertation, the following conclusions should be emphasised. The Parliament’s institutional role in the studied case is connected with the phenomenon of EU identity construction with further reference to the concept of the EU as a normative power. Thus, the Parliament assumed the role of the “democratic supervisor” over the actions of other EU foreign policy actors. Although its role of agenda-setter in the EU-Ukraine relations follows the general trend of the Parliament’s pattern of involvement in EU external relations, the Ukrainian case has revealed two relatively new points: the Parliament’s ambition for the CFSP as the policy area, dealing with security, and its ambition for a deeper involvement in the political processes within this policy area.

Regarding the legal perspective, the Parliament’s performance in the Ukrainian case as well as its general evolving role in the CFSP certainly exceeds formal Lisbon rules. However, this research supports the claim that the EU’s constitutional law cannot be understood through legal positivism only. In addition to regulation by positive law by the provisions of the founding Treaties and inter-institutional agreements, this area is also significantly influenced by legal and political concepts and principles. In a practical sense, it is the liberal democracy model that has been often used as a reference point in terms of the role that a representative assembly should be playing in the public sphere.

The EU’s constant evolution triggers rethinking of its identity, the principles underpinning its institutional system and reconsideration of the role particular institutions should play. Because of its sui generis nature, the EU is sensitive towards such transformations. It implies a higher level of exposure for the EU to public debate in its Member States and academic discourse due to the fact that the latter serve as reference points for its evaluation. Thus, the regulative influence of the legal concept and principles is important for the evolution of the EU. However, if compared to the positive law, their influence is more intricate and less visible. Often they do not provide direct regulation, but instead create possibilities. Thus, the actual outcomes of this influence are dependent on the EP’s own institutional behaviour.

The Parliament’s agenda in terms of the EU’s external identity construction reinforces the appeal to the concepts of democracy and legitimacy regarding the EU’s own institutional system since the core of this identity encompasses the same concepts and values. Thus, reference to these values in terms of the EU’s relations with third countries inevitably raises the issue of the EU’s own institutional system as well as the principles and concepts that underpin it. However, there is no linear connection between these concepts and the enhancement of the Parliament’s position within the EU institutional system. Further practical elaboration of these opportunities depends upon the EP’s ambitions towards particular policy areas as well as its institutional behaviour. In this sense, the Ukrainian case provides a practical illustration of the Parliament’s manifestation of its ambition. Against the background of limited competences within the CFSP, the Parliament intensely debated security issues, thus going beyond the role that the Lisbon Treaty mandated for it.