Implementability of observables, channels and instruments in quantum theory of measurements 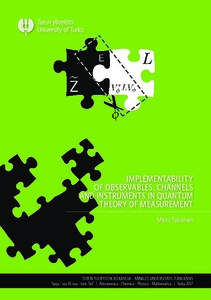 Measurements play an integral part in any scientific theory. Indeed, the observations revealing causal behaviour and symmetries in our world of experience lie at the heart of determining the truth or the falsity of scientific hypotheses. In this regard, quantum theory provides one of the most stringently tested and comprehensive description of the natural world. This thesis is an examination of the mathematical structures of quantum measurements with an emphasis on the measurement implementations of different operational devices: quantum observables, channels and instruments.

The measurability of all the quantum properties a system bears is, in principle, guaranteed by quantum measurement theory. However, as physical processes, measurements are constrained by the laws of physics and it has been long known that certain conservation laws can inhibit the measurements of some of the quantum observables. In this work it is shown that such constraints stem from the fact that the measured observables inherit the symmetries of the measurement devices implementing them.

A quantum measurement set-up can implement a multitude of operational devices as a function of the initial state of the apparatus. In other words, one can realize various maps – even incompatible ones – simply by controlling the apparatus’ state. Due its close resemblance with the classical analogue, this operation is often referred as quantum programming. In this thesis the capabilities and restrictions of quantum programming are explored using a measurement-theoretic approach. Moreover, quantitative methods are developed to address the mutual relations between the programming states of an arbitrary pair of observables or channels.