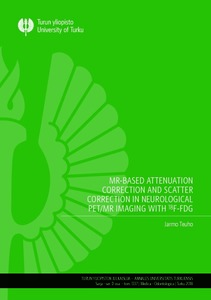 The results show that the quantitative accuracy in PET is well-comparable be-tween PET/MR and PET/CT systems when an attenuation correction method resembling CT-based attenuation correction (CTAC) is implemented. This al-lows achieving of a PET bias within standard uptake value (SUV) quantification repeatability (< 10 % error) and is within the repeatability of PET in most sys-tems and brain regions (< 5 % error). In addition, MRAC considering soft tissue, air and bone can be derived using T1-weighted images alone. The improved version of the MRAC method allows achieving a quantitative accuracy feasible for advanced applications (< 5 % error). MRAC has a minor effect on the scatter correction accuracy (< 3 % error), even when using MRAC without bone.

In conclusion, MRAC can be considered the largest contributing factor to PET quantification bias in 18F-FDG neurological PET/MR. This finding is not explicitly limited only to 18F-FDG imaging. Once an MRAC method that performs close to CTAC is implemented, there is no reason why a PET/MR system would perform differently from a PET/CT system. Such an MRAC method has been developed and is freely available (http://bit.ly/2fx6Jjz). Scatter correction can be considered a non-issue in neurological PET/MR imaging when using 18F-FDG