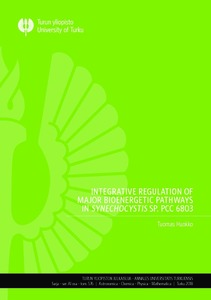 Cyanobacterial photosynthetic and respiratory electron transport chains are both located in the thylakoid membrane producing ATP and reducing agent NADPH. The other major cellular reducing equivalent, NADH, is mainly produced in catabolic reactions in the cytosol. In this thesis work, I took biophysical, biochemical and proteomic approaches to analyze the crosstalk between these two bioenergetic networks in the thylakoids of the cyanobacterium Synechocystis sp. PCC 6803 (hereafter, Synechocystis). Furthermore, novel proteins with a potential function in regulation of the NAD(P)H/NAD(P)+ balance in this organism were addressed.

Canonical respiratory reactions are completed by respiratory terminal oxidases (RTO), and two of them, Cox and Cyd, reside in the thylakoid membrane of Synechocystis. In this work, I show that thylakoid-located RTOs function not only in darkness but also under illumination, alleviating the redox poise of the photosynthetic electron transfer chain by donating electrons to O2. However, they do not have a high capacity to accept electrons under light as demonstrated for the flavodiiron proteins Flv1 and Flv3. Cyd is the main RTO performing O2 photoreduction by electrons derived from the PQ pool and originating from Photosystem (PS) II mediated water splitting. Cox, on the other hand, is the most important RTO in dark respiration, but it can compete with PSI for electrons deriving from water splitting by PSII under high light if Cyd is absent.

In addition to energy production, the regulation of NAD(P)H/ NAD(P)+ redox homeostasis, which allows the interplay between anabolic and catabolic metabolism, becomes extremely important when cyanobacteria switch from one growth mode to the other. Pyridine nucleotide transhydrogenase PntAB is an integral membrane protein complex coupling the oxidation of NADH and concurrent reduction of NADP+ to proton translocation across the membrane. I demonstrate that PntAB, which is located in the thylakoid membrane, is indispensable for the growth of Synechocystis under low-light mixotrophy, being the major source for NADPH under these conditions. Furthermore, PntAB has an indirect effect on the maintenance of the photosynthetic machinery under low-light mixotrophic conditions. The second group of enzymes functioning in pyridine nucleotide redox reactions is type 2 NAD(P)H dehydrogenases (NDH-2), which catalyze electron transport from NAD(P)H to quinones without simultaneous proton translocation or major effect on respiration. Synechocystis has three NDH-2s: NdbA, NdbB and NdbC. I show that under photoautotrophic conditions the absence of the plasma membrane located NdbC causes downregulation of glycolytic enzymes, likely due to the elevated NADH/NAD+ ratio, which provokes modulations in several metabolic pathways and in cell morphology. Nevertheless, the ΔndbC mutant showed growth retardation only upon light-activated heterotrophic growth (LAHG). On the other hand, NdbA, which resides in the thylakoid membrane, is required for optimal growth of Synechocystis under LAHG conditions by regulating photosynthetic functionality as well as inorganic carbon uptake.

Results presented in this thesis provide a better means to design cyanobacteria-based living factories where both the direction of the maximum amount of electrons to desired end products, and optimal regulation of the NAD(P)H/NAD(P)+ ratio, are essential for the maximal productivity.