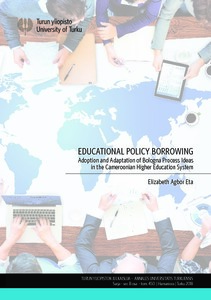 Although initially a European reform, the Bologna Process has had a spillover effect in other parts of the world. This study sought to contribute to the research and international debate on the transformations exerted by the Bologna Process outside the European higher education area, with a focus on the Cameroonian higher education system. Specifically, the dissertation uses policy borrowing as a theoretical framework to examine the adoption and adaptation of Bologna reforms in Cameroon. To this end, four original empirical studies were conducted that focus on aspects of the adoption (reasons for the adoption, introduction, dissemination and local response) and adaptation (local translation and implementation) stages of policy borrowing of Bologna objectives in Cameroon. The focus in Articles I and II is on adoption, while Articles III and IV concentrate on adaptation. This study also includes an introductory section in which the context, scope, theoretical and methodological choices, and main findings from the empirical studies are discussed.

Data for the analysis consisted of text documents and 62 semi-structured interviews conducted between October and December 2013. The interviewees were various stakeholders in higher education in Cameroon, including policy makers, university administrators and lecturers. The data were analysed mainly through thematic analysis (Articles I, II & IV), with thematic analysis and temporal analytical approaches combined for Article III.

The results showed that the main instruments for Bologna Process dissemination came through national and institutional texts guiding implementation and through conferences and seminars. As a borrowed model, this dissertation indicated that learning from the borrower (externalisation of the borrowing potential) took the form of Cameroonian experts traveling abroad and Bologna experts traveling to Cameroon to share their experiences with the Bologna Process. The study indicated that colonial history shaped the local response, i.e., public perceptions of Bologna adoption in Cameroon, highlighting tension and complexities in introducing a borrowed model in a dual educational system. The implementation of some of the Bologna objectives in Cameroon supported the notion that policy borrowing is always adapted based on contextual factors (in the case of the degree structure and credit system). Its implementation also highlighted the fact that sometimes, policy borrowing can be used only as a reference point to inspire local reforms and solutions (e.g., the employability agenda).

The present set of studies takes on new significance in the current context of policy borrowing, indicating the shift from the diverse reasons for cross-national attraction in a particular education system to a cross-regional attraction in a regional space with harmonisation as one of the main impulses for policy borrowing. Although this dissertation focuses on the Bologna Process’ impact on Cameroon’s higher education system as a single-country comparative design, the discussions presented herein also connect the national case to international and regional debates.