Neurofibromatosis type 1: From gene to population and cancer

Neurofibromatosis type 1: From gene to population and cancer 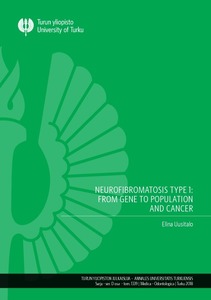 Neurofibromatosis type 1 (NF1) is an autosomal dominant syndrome caused by mutations in the large and complex NF1 tumor suppressor gene on chromosome 17. NF1 is the most frequent hereditary tumor predisposition syndrome. The diagnosis of NF1 is usually based on clinical findings, such as tumors of the peripheral nervous system called neurofibromas and hyperpigmentary abnormalities such as café-au-lait pigment spots. This thesis investigated the molecular diagnostics, epidemiology, and cancer biology associated with the NF1 cancer syndrome.

In this thesis, a new method for NF1 molecular diagnostics exploiting nextgeneration sequencing was developed. This is important, because mutation analysis is currently not available for every patient, and in the majority of the patients, the diagnosis is still merely based on clinical manifestations. A national NF1 cohort of 1,404 patients was used in this thesis, and a retrospective register-based total population study was carried out to evaluate the epidemiology and cancer incidence of NF1 in Finland. The results revealed that NF1 incidence is higher than previously accepted. The results with a birth incidence of 1/2,000 challenge the generally accepted NF1 incidence of ~1/3,000. The NF1 cancer incidence was studied with data from the Finnish Cancer Registry. A five-fold increase in cancer incidence was observed, which is the highest cancer incidence reported so far. In addition, cancers in the NF1 patients have a worse prognosis than the corresponding cancers in the general population. In NF1 patients the risk for breast cancer is also elevated, particularly under the age of 40. NF1-related breast cancer has poor prognosis, which is not solely explained by occurrence at young age or by histopathological type. Our results suggest that NF1 mutations are an independent factor contributing to low survival of patients with breast cancer. Active surveillance of NF1 patients and awareness of the NF1-related cancer risk are needed for early detection of the tumors and improved prognosis.