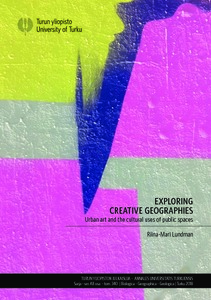 In this thesis, I study various kinds of creative, artistic, and cultural activities that take place in the public spaces of cities. I focus on the ways in which public spaces constitute opportunities for art and culture, as well as how citizens, artists, and other urban actors can take part in the creation and development of urban environments. My research consists of four case studies that represent different cultural uses of urban public spaces, including temporary urban interventions, do-it-yourself (DIY) urban practices, the more established forms of new genre public art, and art-based urban planning methods. I employ the concept of ‘urban art’ as an umbrella term to describe these artistic and creative practices in order to emphasise their context and roles in wider urban processes. The specific contribution of my dissertation concerns the rules, regulations, and responsibilities related to the cultural uses of public spaces. In addition, I discuss the role of the more insurgent forms of citizen action and creativity that occur in cities. Hence, the relationship between formal and informal urban practices is another focus of my study. I offer a pluralist view on public space, where ‘public’ refers to things that can be both accessible and political but in which the conflictual nature of public space is also acknowledged and permissible.

My research belongs to a study field best known as ‘creative geographies’, as I am interested in the art–site relationships and creative practices related to geographical thinking. Additionally, critical urban geography has had a strong influence on my work. This research takes a stand on the topic of ‘the politics of public space’, as I discuss different kinds of possibilities and challenges concerning the creative forms of urban actions and resistance. Moreover, I introduce the concept of ‘spatial responsibility’ in order to discuss the many legal, moral, and practical aspects regarding the cultural uses of urban public spaces. The research methods that I have used are based on the case study approach and on different qualitative methods. The cases I have studied have all taken place in the city of Turku, Finland.

As a result of this study, I present how different elements of public space (material, social, and those related to meanings, expectations, and values) have an influence on the artistic and cultural conducts in the city, and how art and culture can be used to promote the ‘publicness’ of urban spaces. For example, I argue that artistic practices are useful in the playful production of public spaces and as participatory tools for urban planning. Moreover, I claim that urban art can be employed to challenge the conventional uses and orders of urban spaces. Nevertheless, I also demonstrate that there are many rules and regulations governing spontaneous actions in cities and there exist internal codes and etiquettes about the creative practices themselves. As a consequence, I argue that many creative urban activities are located somewhere in-between the categories of ‘formal’ and ‘informal’. As regards the spatial responsibilities for the city, I claim that they are not only about obligations or duties, but they also involve the idea of caring for the city and of the radical subversion of urban order. Overall, my study shows that these many ambiguities related to public spaces and their cultural uses, as well as to urban rules, regulations, and responsibilities, indicate that the public space is still, above all, a dynamic place characterised by spatial negotiations, conflict, and diversity.