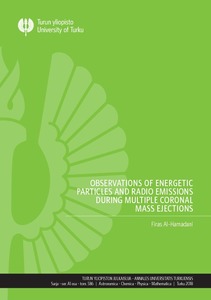 A series of SEP events with three peaks in the intensity-time profiles within a time interval of _ 26 hours is analysed. The first event was weak and the proton intensity enhancement was observed only below _25 MeV. The second particle event was associated with an X1.5-class X-ray flare and a fast and wide CME. The CME had been reported to be radio quiet. The third SEP event occurred about 18 hours later on the tail of the second one, reached proton energies up to _60 MeV, and lasted for roughly 2 days at energies >10 MeV. We found that the first small SEP enhancement was caused by flare acceleration and the following two peaks were produced by shock waves driven by fast CMEs.

A study of SEP events during periods with consecutive solar eruptions originating from a single active region is presented. Each sequence consisted of three consecutive, intense Xray flares originating from the same active region, each one accompanied by fast halo CMEs, extreme-ultraviolet (EUV) waves and type III and type II radio bursts. The first two eruptions in each sequence were accompanied by clear SEP events, while the third event did not show any measurable SEP enhancement above the background. We suggest that the previously launched interplanetary CMEs and shocks modified the propagation paths of both the electron beams responsible of the type III radio-emission and solar energetic protons. Also the previous eruptions could have reduced the seed population, leading to inefficient particle acceleration.

A statistical study of IP radio type II bursts was carried out to determine the causes of the intense enhancements in their radio emissions. Type II bursts are known to be due to propagating shocks that are often associated with fast halo-type coronal mass ejections. To obtain the directions and heights for the propagating CMEs and the type II bursts, we analysed the radio spectral data and the white-light coronagraph images of our selected events. CMEs preceding the selected events were included in the analysis to verify whether CME interaction was possible. As a result, we found that most of the events were due to shock-streamer interactions, while in some cases CME-CME interaction was the cause of the enhancements.

An unusual solar event consisting of three consecutive CMEs originating from the same active region was investigated. This event was associated with several periods of radio type II burst emission at decameter–hectometer (DH) wavelengths. Based on our data analysis we conclude that the first radio type II burst could have been due to a shock wave launched by a sudden acceleration of the CME2 core and accelerating the CME3, if the plasma densities were very low ahead of the CMEs, or by the accelerating CME1 core if the plasma densities were very high inside the CME1 cavity. The start of the second type II burst at higher frequencies indicates that it was due to a separate shock, propagating to a different direction, within different atmospheric density. The last type II burst period showed enhanced emission in a wider bandwidth, which was most probably due to the CME–CME interactions.