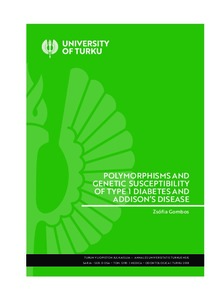 The HLA region accounts for approximately half of the genetic susceptibility in type 1 diabetes. The strongest genetic association with type 1 diabetes (T1D) is conferred by HLA class II alleles, where particular combinations of the DRB1, DQA1 and DQB1 define disease risk. Our aim was to investigate the effect of non-class II loci independently of the DQ-DR genes and to localize them using case-control study and transmission study in nuclear families. We explored the contribution of selected microsatellite markers in the HLA class III and I regions covering a 4Mb region telomeric to the DQB1 gene and also the HLA-A and -B gene alleles were analyzed for diabetes association. The effect of found markers in the various phases of progression of autoimmunity was further looked in children participating in the Finnish Type 1 Diabetes Prediction and Prevention study.

In our case-control study (stratified subjects for DR3/DRB1*04:04 and DR3/DRB1*04:01 genotypes) we found that the microsatellite markers located between C12A and C143 near the HLA-B gene confer a strong association for T1D. HLA-B*39 allele in linkage disequilibrium with the HLA-A*24 allele was associated with the highest risk on the DRB1*04:04 haplotype.

The association between the HLA-DR-DQ haplotypes and class I HLA-A and -B alleles during the progression from autoantibody seroconversion to clinical disease was studied in 249 children. The Cox-regression multivariate analysis demonstrated a significant promoting effect of HLA-B*39 allele after seroconversion for the second biochemical autoantibody, whereas the HLA-A*03 allele was associated with protection after the first- and second biochemical autoantibody appearances. The HLA-B*39 effect during the disease was mainly found in children carrying the DR3/DR4 genotype.

Addison’s disease is an organ-specific autoimmune disease, which is often found together with T1D as part of a polyendocrinopathy syndrome. Haplotype analysis using the microsatellite markers did not provide statistical support to the importance of HLA regions other than HLA-DR-DQ loci in three different European populations (Finnish, Estonian, Russian). We found that Addison’s disease was preferentially associated with DRB1*04:04 and also DRB1*04:03 alleles together with DQB1*03:02 contrasting thus with T1D where DRB1*04:01 was the most strongly associated allele in DQB1*03:02 positive haplotypes.