Development of male reproductive health in puberty and young adulthood

Development of male reproductive health in puberty and young adulthood 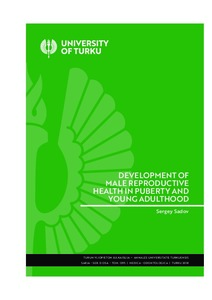 The deterioration of male reproductive health is a worrying global trend in respect to the individual fertility of the man. Modern knowledge suggests the etiological role for early testicular damage and harmful effects of environmental factors.

This thesis is based on the analysis of 3 longitudinal cohorts. In the first pubertal study, we compared pubertal growth of testis between groups of boys with and without history of congenital cryptorchidism. In the second pubertal study, we assessed the influence of a low-saturated-fat and low-cholesterol dietary intervention on hormonal status and growth during puberty in boys and girls. In the longitudinal study on adult men, changes in semen quality from 19 to 29 years of age were analysed.

Congenitally undescended testes demonstrated poor growth during puberty resulting in reduced postpubertal size. The timing of pubertal onset did not differ between boys with and without history of congenital cryptorchidism indicating the normal functioning of central regulatory mechanisms of puberty. We provided validation data on the use of ruler measurements in denoting of pubertal onset. Reference data on ultrasonographic testicular volumes defining the onset of puberty was also presented. The growth and hormonal status during puberty was not influenced by a low-saturated-fat and low-cholesterol dietary intervention. However, our study did not provide data on postmenarcheal hormones in girls. Longitudinal follow-up of semen quality during young adulthood showed that almost full individual spermatogenic potential is reached at the age of 19 years. Simultaneously, we observed slight improvement in the percentage of motile sperm and percentage of morphologically normal spermatozoa as the men got older.