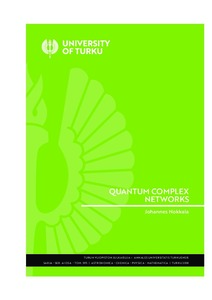 This Thesis focuses on networks of interacting quantum harmonic oscillators and in particular, on them as environments for an open quantum system, their probing via the open system, their transport properties, and their experimental implementation. Exact Gaussian dynamics of such networks is considered throughout the Thesis.

Networks of interacting quantum systems have been used to model structured environments before, but most studies have considered either small or non-complex networks. Here this problem is addressed by investigating what kind of environments complex networks of quantum systems are, with specific attention paid on the presence or absence of memory effects (non-Markovianity) of the reduced open system dynamics. The probing of complex networks is considered in two different scenarios: when the probe can be coupled to any system in the network, and when it can be coupled to just one. It is shown that for identical oscillators and uniform interaction strengths between them, much can be said about the network also in the latter case. The problem of discriminating between two networks is also discussed.

While state transfer between two sites in a (typically non-complex) network is a well-known problem, this Thesis considers a more general setting where multiple parties send and receive quantum information simultaneously through a quantum network. It is discussed what properties would make a network suited for efficient routing, and what is needed for a systematic search and ranking of such networks. Finding such networks complex enough to be resilient to random node or link failures would be ideal.

The merit and applicability of the work described so far depends crucially on the ability to implement networks of both reasonable size and complex structure, which is something the previous proposals lack. The ability to implement several different networks with a fixed experimental setup is also highly desirable. In this Thesis the problem is solved with a proposal of a fully reconfigurable experimental realization, based on mapping the network dynamics to a multimode optical platform.