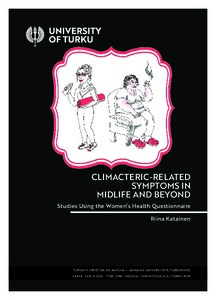 This study aimed to evaluate the psychometric properties of the Women’s Health Questionnaire (WHQ) and to investigate whether age, socioeconomic and lifestyle factors, chronic diseases, or cortisol metabolism are associated with the climacteric-related symptoms measured by the WHQ.

The WHQ’s psychometric properties were evaluated in a sample of 3,421 women aged 41−54 years. The same cross-sectional sample was used to investigate associations between climacteric-related symptoms and age, socioeconomic and lifestyle factors, and chronic diseases. The effect of age was also investigated in a 19-year follow-up study of 65 women, who were 47−65 years old and perimenopausal or postmenopausal at baseline. Associations between climacteric-related symptoms and cortisol metabolism were investigated in a sample of 35 perimenopausal and postmenopausal women, aged 45−70 years. Plasma cortisol levels were measured every 20 minutes over 24 hours, and urinary cortisol was analyzed from 24-hour urine collections.

The WHQ is a valid instrument to measure climacteric-related symptoms in Finnish midlife women. In the cross-sectional study, climacteric-related symptoms became more common with age, while in the follow-up study, vasomotor symptoms (VMS), sleep problems, and cognitive difficulties decreased after menopause over time. Higher education, employment, and a healthy lifestyle were associated with fewer symptoms. VMS and sleep problems were relatively independent from chronic diseases, whereas mental and cognitive symptoms were associated with several diseases. Climacteric-related symptoms were not substantially interrelated with cortisol metabolism. To conclude, physicians should pay attention to midlife women’s overall health and to potential concurrent diseases, and encourage women to make healthy lifestyle choices.