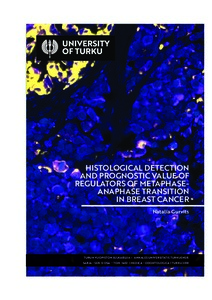 The study focuses on proteins Securin, Pttg1IP and Separase, involved in metaphase-anaphase transition of mitosis, and microRNAs -494, -205, -21 and -126 in association with cell proliferation. The aim is to demonstrate the expression patterns of the studied proteins and levels of microRNAs, and to assess their applicability in predicting the outcome of patients diagnosed with invasive breast cancer. In addition, the influence of fixation delay and time on the staining results of fresh breast cancer tissue is studied.

The study comprises 447 invasive breast carcinomas and a total of 143 triple-negative breast carcinomas diagnosed in Central Hospital of Central Finland during 1987 – 1997 and Turku University Hospital, Turku, Finland, during 2005 – 2015 with complete clinical data and a maximum follow-up period of 22 years. The tissue material was arranged in tissue microarrays. The tissue sections were prepared by immunohistochemical and double and triple immunofluorescence stainings for the investigation of the proteins. An automated in situ hybridization method was developed for identifying the studied miRNAs.