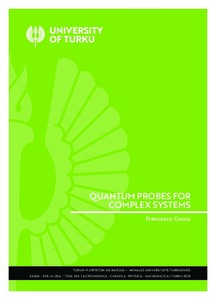 Quantum probing is a fairly wide topic deepening its roots into many fields as it can borrow tools from, and be applied to, many-body physics, open quantum systems theory, quantum information and quantum thermodynamics. Its wide range of applicability, i.e. the diverse systems under investigations and their specific properties, contributes in making a general theory of quantum probing a rather challenging, if not impossible, task. Despite the need to specialize the probing technique to the various physical systems, we have identified a leitmotiv in our probing approach. Specifically, we will consider a perturbation potential acting as the source of the probing procedure, in most cases this will be an impurity in the complex environment acting as quantum probe. We will generally quantify the information exchange between the probe and its environment, and explore the connection to the concept of non-Markovian, i.e. memoryless, quantum dynamics.

This thesis aims at discussing probing protocols for atomic systems confined in optical lattices, both fermionic and bosonic species, as well as trapped ions. The systems inquired can be currently implemented in the field of ultra cold atoms, where they have attracted interest as ideal candidates for quantum simulators and quantum technologies. We will show how to design protocols in which these cold many-body systems act as an environment to a quantum probe, often designed as an impurity atom. Exploiting tools from open quantum systems theory we will discuss how to detect, from the dynamics of the probe, the characteristics of the complex environment.

The key idea is to use the quantum probe as read-out device, the properties of the environment are then inferred trough measurements performed exclusively on the probe. Quantities of interest will be related to the environment energy spectrum, equilibrium properties and temperature. The quantum probing paradigm will also allow us to investigate critical phenomena such as phase transitions and orthogonality catastrophe. Finally, we will show how the memory effects induced in the reduced dynamics of an immersed quantum probe can witness, to some extent, the character of the excitations of the environment hinting to a natural link between non-Markovianity and localisation phenomena.