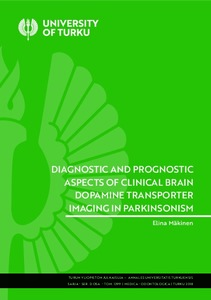 Idiopathic Parkinson’s disease (PD) is the most frequent cause of clinical parkinsonism. However, the diagnostic accuracy of PD is suboptimal. One biomarker that assists with the parkinsonism differential diagnostics is functional dopamine transporter (DAT) imaging. The accuracy of DAT single photon emission computed tomography (SPECT) imaging is high for detecting striatal dopamine deficiency associated with neurodegenerative parkinsonism. However, its limitations and associations with clinical characteristics are not yet fully understood, particularly in patients with clinical parkinsonism of uncertain origin.

In this thesis, the retrospective studies investigated the associations between striatal dopamine deficiency and structural midbrain atrophy measurements and long-term survival in PD patients. As both visual and semi-quantitative analysis methods are broadly used for DAT SPECT scans, the concordance between these methods was investigated. The cross-sectional clinical and imaging study investigated which of the parkinsonian motor signs are associated with a higher likelihood of striatal DAT deficiency, and whether these signs are associated with DAT loss in certain striatal regions in patients with neurodegenerative parkinsonism.

The results showed that there were no associations between the midbrain-to-pons ratios, suggestive of midbrain atrophy, and striatal dopamine deficiency in DP. Expert visual DAT image analyses and the semi-quantitative analyses did not match in 10% of cases; however, none of these patients had neurodegenerative parkinsonism according to the clinical follow-ups. The level of DAT deficiency was not associated with survival in PD. Finally, both upper extremity rigidity and hypomimia were independently associated with a higher likelihood of striatal dopamine deficiency. Hypomimia was specifically associated with caudate nucleus dopamine loss in patients with abnormal striatal DAT binding.

The results indicate that midbrain-to-pons ratios cannot be used to estimate the level of striatal DAT deficiency in patients with PD. The scans that showed a discrepancy between the different analysis methods should likely be interpreted as normal. Dopamine deficiency levels cannot be used to predict patient survival in PD. Presence of upper extremity rigidity and hypomimia in clinical neurological examinations may be useful markers in the differential diagnosis of clinically uncertain parkinsonism and tremor as they point to striatal DAT deficiency.