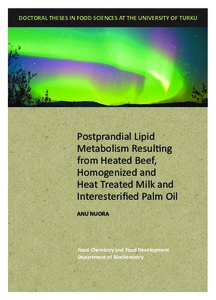 Today, although our food is more processed than ever the effects of food processing on dietary lipids and their absorption and postprandial metabolism are not fully understood. The lipid composition of food impacts postprandial lipemia. The effects of different fats on the magnitude of postprandial lipemia depend on the fatty acid composition, mainly the chain length and degree of unsaturation of the fatty acids as well as the positioning of the fatty acids in the triacylglycerol backbone. Heightened or prolonged postprandial lipemia is a risk factor for atherosclerosis, obesity and type 2 diabetes. The technological properties of fat depend on its chemical and physical properties, thus, decreases in lipid droplet size or change of distribution of fatty acids in the triacylglycerol backbone during processing is often desired. Lipid oxidation is generally undesired and it deteriorates the quality of food. When absorbed, the products of lipid oxidation might participate in the development of atherosclerosis. The aim of the current work was to investigate the effects of homogenization of milk, heating of beef and interesterification of palm oil on postprandial lipid metabolism. Beef, cow´s milk and palm oil were selected as model foods since they are common commodities as such or as added incredients.

Beef steaks were investigated in relation to lipid oxidation caused by two differing cooking methods and in relation to the oxidized lipids found in plasma after consumption of these steaks. Lipid oxidation products increased with thermal processing and differences between pan-frying and sous-vide treatment were detected in the beef steaks as well as in the postprandial plasma. Cow´s milk was subjected to heating and homogenization to compare the effects of different processing methods on gastrointestinal symptoms and postprandial lipemia in subjects who experience gastrointestinal symptoms related to cow´s milk consumption, even when neither lactose intolerance nor cow´s milk allergy had not been diagnosed. Raw milk, pasteurized milk, homogenized and pasteurized milk, and UHT treated homogenized milk were served to sensitive subjects with or without an ingestible pressure measuring capsule. Postprandial lipemia did not differ after consumption of the differently processed milk samples, but significant differences were found in the fatty acid composition of postprandial plasma. The amount, severity or duration of the reported symptoms or the intestinal pressure did not differ between the different milk samples.

Palm oil was interesterified to make the fat more solid and to increase the amount of palmitic acid in the sn-2 position and further to compare the effects of native palm oil and interesterified palm oil on postprandial lipemia in men with or without metabolic syndrome. In both volunteer groups, palm oil resulted in greater, mainly prolonged, postprandial lipemia compared to interesterified palm oil. The total triacylglycerol content of chylomicrons or fatty acid concentrations did not differ significantly between the two volunteer groups.

In the research for this thesis, oxidized lipids were detected in the lipoproteins of postprandial plasma. High levels of lipid oxidation products were detected in the HDL fraction suggesting that the protective effect of HDL may extend to the reverse-transport of oxidized lipid species. Homogenization and heat treatment of milk did not seem to induce gastrointestinal symptoms in milk sensitive but lactose tolerant subjects nor did homogenization notably affect the intestinal absorption of triacylglycerols from milk fat globules. The different positioning of palmitic acid in a triacylglycerol had an effect on postprandial lipemia in healthy individuals and the effect was substantiated also in subjects with dyslipidemia. The results of this thesis shows that the effect of food processing on dietary lipids and postprandial lipemia depend on the processing method and the lipid matrix.