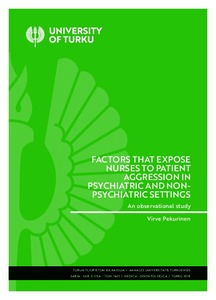 The overall aim of this study is to describe nurses’ individual characteristics and relationship and work environment factors that expose them to patient aggression in psychiatric and non-psychiatric care settings (emergency, and medical and surgical specialties). The Socio-Ecological Model for the prevention of patientto-worker aggression in hospitals was used as a theoretical framework. The setting of this study was made up of the 21 hospitals that were included in the Finnish Public Sector Study. The participants were the nurses who participated in the Finnish Public Sector Study in 2012 and 2015.

First, the extent of the problem was described by determining the occurrence, characteristics and consequences of aggression in psychiatric and two non-psychiatric settings by using cross-sectional data from 5228 nurses. Second, cross-sectional approaches were used to identify how nurses’ individual characteristics, relationship and work environment factors were associated with their experiences of patient aggression in psychiatric specialties (758–923 nurses). Third, a longitudinal approach was used to investigate the associations identified in the cross-sectional analysis, in all three nursing groups (2981 nurses). Different types of statistical methods were used to analyze the data, e.g., descriptive statistics, logistic regression and advanced modeling techniques.