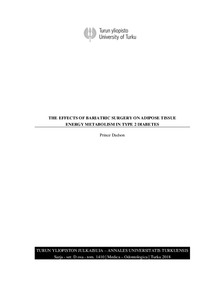 Obesity-related metabolic disturbances typically occur when the available energy exceeds the storage capacity of white adipose tissue (WAT), which can lead to ectopic lipid deposition, insulin resistance and type 2 diabetes. The re-discovery of the existence of energy consuming brown adipose tissue (BAT) in adult humans has ignited interest in finding novel approaches for BAT activation to be used for the treatment of obesity and diabetes. Currently, bariatric surgery procedures provide marked and sustained weight loss, and remission of diabetes in some severely obese patients. Energy metabolism in adipose tissue in the presence of obesity and diabetes, and the changes that occur after weight loss induced by surgery are largely understudied. The present work hypothesized that the WAT and BAT energy metab-olism are different between obese and non-obese subjects, and also between obese with and without diabetes subgroups. Bariatric surgery improves adipose energy metabolism in severely obese patients independent of diabetes status.

Here, severely obese patients, with a mean BMI of 40 kg/m², roughly half with diabetes, and age-matched lean metabolically healthy controls, were studied with PET-CT and MRI to measure adipose tissue energy (glucose and fatty acid) metabolism, and blood flow distribution. The regional distribution of WAT; and the browning of supraclavicular BAT were also studied. White adipocyte size and numbers in biopsies were measured. Obese patients were studied before and at 6 months after surgery, and normal weight healthy controls studied once.

When the obese patients were treated as a combined group, their blood flow distribution, glucose and fatty acid metabolism rates in WAT were significantly impaired compared to nonobese healthy control subjects. Blood flow, fatty acid or glucose uptake rates when expressed per expanded depot mass were higher in the obese group compared to controls. Fatty acid uptake per adipocyte was higher only for diabetic patients of the obese group compared to the controls. Excessive accumulation of WAT was a limiting factor with regards BAT fatty acid metabolism, or then the browning of adipose tissue in the supraclavicular depot. After surgery, adipose glucose uptake rates increased independent of diabetes status. Fatty acid and blood flow rates decreased significantly when expressed per depot size, and per adipocyte. However, the postsurgery depot glucose uptake rates were similar to values in the presurgery state. BAT lipid metabolism increased significantly with weight loss, and values were associated with decreased adiposity along with improved whole body insulin sensitivity.

The current study highlights the negative impact of severe obesity and diabetes on adipose tissue energy metabolism, which appears to be partly due to expanded fat mass mediated by adipocyte hypertrophy or hyperplasia. Weight reduction with bariatric surgery improves adipose energy metabolism, and conse-quently the overall metabolic health in obese individuals regardless of the presence of diabetes.