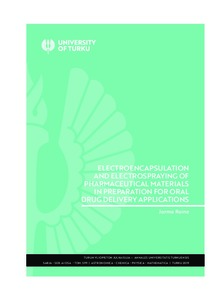 In bi-polar parallel nozzle electroencapsulation, two oppositely charged droplet jets are produced by electrospraying (electrostatic atomization), a method of extracting micro- or nanodroplets from a body of liquid using electrical forces. The two species of droplets are attracted to each other due to Coulombic forces. Upon contact, droplets of similar size can merge into a single-phase, or form a core-shell capsule structure, depending on the mutual miscibility of the liquids.

In this work, an electroencapsulation setup was designed and experimented for the single-step production of two types of drug carrier particles of 10–50 μm in size: wrinkled, solid Eudragit L 100 enteric polymer micromatrix particles; and spherical microcapsules consisting of a solid Eudragit E 100 polymer shell and a liquid glycerol core. The carrier particle payload consisted of a model drug (griseofulvin); or griseofulvin loaded, mesoporous silicon (PSi) nano- and microparticles, which themselves are functional drug carriers. The goal was to obtain the carrier particle payloads as either stable drug dispersions in a disordered solid state, or non-agglomerated PSi nanoparticle dispersions, to enhance the drug dissolution properties at release. The carrier formulations would effectively render the payload in the form of an inert micropowder for purposes of handling and dosing. In oral administration, the formulations were to shield the payload from intestinal metabolism, and to restrain its release until arrival to target pH-conditions.

The carrier particles were characterized to evaluate these properties. The micromatrix particles were proven stable and gastro-resistant in vitro. Griseofulvin dissolution and absorption properties improved significantly, the latter especially for the drug loaded PSi payloads. Finally, the efficiency of the asymmetric core-shell microcapsule production was optimized using Taguchi techniques. In conclusion, electroencapsulation was found to be a potentially feasible method to improve the oral bioavailability of poorly soluble drugs.

Furthermore, partially crystalline piroxicam microparticles were produced by electrospraying, and characterized. The crystalline phase was shown to consist of a previously unknown, stable polymorphic form of piroxicam. The result suggests the method could provide a unique way to produce novel drug polymorphs. Thus, it is possible that the dissolution properties of certain drug materials could be improved sufficiently to facilitate oral administration, without the necessity to use more complex formulations.