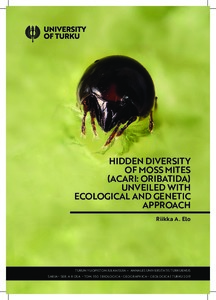 Moss mites (Acari: Oribatida) are microscopic (0.1–1 mm) soil-dwelling arachnids that function as soil decomposers. The oribatids are among the most numerous soil animals with abundances reaching up to 200,000 specimens and 50 species per one square meter of soil. Despite their ubiquitous and abundant existence, they are classified as a poorly known animal group, both in Finland and elsewhere.

In this thesis I study the diversity of oribatids in a previously undocumented microhabitat, red wood ant nest mounds (of the Formica rufa group), and the special characteristics of that habitat. In addition, I study whether forest clear felling detrimentally affects the physical properties of ant nests and the oribatid fauna inhabiting those nests. Using DNA-based methods, I also investigate species richness, phylogeny, and species boundaries within the genus Phthiracarus Perty 1841.

First, I compared the community composition of oribatids between ant (Formica polyctena) nest mounds and the surrounding soil. The study revealed that equally abundant fauna inhabited the two habitats, but the community composition differed; these two habitats were predominantly inhabited by different species. Second, I compared the community composition of oribatids between the parts of an ant mound. I found that, as was presumed, the oribatids predominantly inhabited the surface layer of mounds, which was also observed to host the highest moisture. This study revealed that the distribution of oribatids is moisture-related within ant mounds. These results revealed that ants and their nest mounds providing optimal conditions for decomposer fauna are important factors in maintaining oribatid diversity in the forest landscape.

The next study investigated how the physical properties of ant nests (those of F. aquilonia) change due to forest clear felling by comparing mounds located in mature spruce forest and its clear fells. The study showed that the surface layer of mounds was significantly drier in clear fells than in undisturbed forest, and due to the dryness, the mounds were also relatively cooler as they lose thermal capacity on clear fells. Next, I studied whether these carry-over effects have an impact on the oribatid communities inhabiting the ant nests. The study revealed that the species richness was lower in clear fell mounds, but there were no clear changes in the total abundance or community composition of oribatids.

Morphology-based identification of these minute animals is difficult due to the phenotypic variation of species. Therefore, using molecular systematic methods I investigated the species delineation of the genus Phthiracarus among nine species. Despite the challenges in obtaining DNA sequences, the DNA-based analysis (using markers COI, 28S D3, ITSS) showed that five species formed clear entities (clades), while the other four species were split into two haplotypes, indicating cryptic diversity. These results highlight that the actual species diversity may be higher than previously known. Hence, the results reveal a need to develop further the DNA-based taxonomic methods for oribatids.

This thesis provides novel information about the diversity, ecology, and habitat selection of oribatid mites in a distinct habitat: wood ant nest mounds. Using systematic sampling and a species-specific approach I showed that ant mounds are central factors in maintaining the oribatid diversity in forests. Moreover, the ant mounds are inhabited by a large variety of other invertebrates, and hence these microhabitats form diversity hotspots in the forest landscape. Thus, the red wood ant colonies should be taken into consideration when making conservation decisions. The red wood ant species are still viable (to use the IUCN category) in the boreal forest of Finland, but in many other European countries they are classified as near-threatened species. Hence, conservation of these distinct habitats is of great value.

Appropriate identification of organisms (taxonomy, systematics) is a cornerstone in the studies focusing on biodiversity research. For this purpose, DNA taxonomy may provide a fast and precise tool in characterizing species, especially in the case of microscopic organisms that are otherwise challenging to identify. This thesis provided the first DNA reference library for the genus Phthiracarus, revealing possible cryptic diversity, but also highlighting the need for developing new laboratory protocols for the future studies of this poorly known animal group.