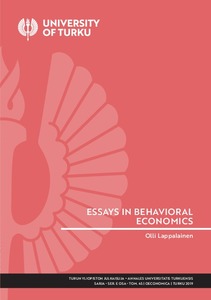 In paper 3, I study experimentally a voluntary contribution game in which returns from the private project have diminishing marginal benefits and the contributions to the joint project exhibit pairwise strategic complementarities. As a control I use a public good game with an identical private production, but standard public good aggregation. A significant over-contribution is observed in both settings when the group size is 5, but it is much higher under the complementary technology, and drops drastically when the group size is reduced.

In paper 4, we study the price setting behavior of monopolist sellers and bids made by buyers. The buyers receive private information about the fundamental value of an asset and make a bid for it in an exogenously and randomly determined order. We find that the sellers failed to update their prices both upwards and downward after receiving new information. This sluggish updating strategy turned out beneficial, as theoretically optimal higher prices assuming common knowledge of rationality among traders trades would have led to fewer trades, and the higher price would not have been enough to offset the losses incurred from trades forfeited.