Cyanobacteria as biocatalysts for the production of volatile hydrocarbons

Cyanobacteria as biocatalysts for the production of volatile hydrocarbons 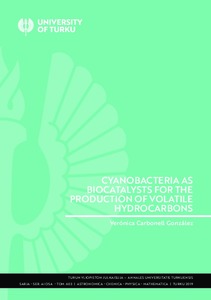 The genetic engineering of cyanobacteria is seen as a promising strategy to develop future photosynthetic microbial cell factories capable of generating carbon-based compounds from water, CO2 and solar energy. This synthetic biology approach has already given insight to the strategic re-design of endogenous cellular metabolism, with the diversion of fixed carbon towards specific end products being the main goal. However, such technology is still at research level and several drawbacks need to be overcome before economic viability is achieved. Commonly encountered problems include the genetic instability of heterologous genes, low enzyme efficiency, and a lack of promoters, which are suited to strong and flexible gene expression in cyanobacteria.

In this work, the performance of different promoters in cyanobacteria was evaluated through the heterologous expression of the ethylene-forming enzyme (EFE) from Pseudomonas syringae. In this way, EFE, which catalyzes the synthesis of ethylene, was successfully employed as a non-invasive reporter protein. The rate of ethylene accumulation in the headspace of sealed cultures indicated the strength and inducibility of the tested promoters. To study the genetic instability of heterologous pathways, efe was also used as a model system. Expression of efe in Synechococcus sp. PCC 7942 has been reported as being unstable due to gene truncation at CGATG sites, resulting in a loss of ethylene production. Apparently, in later publications, such instability was by-passed via efe codon optimization and expression in Synechocystis PCC 6803. The need for codon optimization and the avoidance of associated mutational elements was re-evaluated and, demonstrated that these modifications were unnecessary for a sustained and stable production of ethylene. Furthermore, the cause of the genetic instability previously reported in Synechococcus efe mutants was identified and, developed stable efe mutants for this strain.

To gain new insight to the catalytic performance in enzyme efficiency, the aldehyde deformylating oxygenase (ADO) enzyme from cyanobacteria was used. ADO is able to produce Cn-1 hydrocarbons from their aldehyde precursors. However, it has poor catalytic activity. An in vivo method was developed for the comparison of five ADO orthologs in E. coli. Results identified ADO-specific differences in regards to catalytic performance and substrate specificity, which may help future ADO engineering strategies and improve the efficiency of hydrocarbon production.