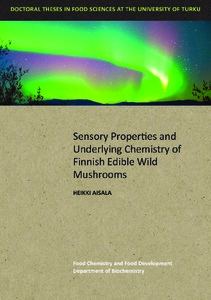 Mushrooms have been part of the human diet for many millennia. They represent an evolutionarily old and large group of edible organisms. Finnish people have a long history of picking and using wild mushrooms for food especially in the eastern regions of the country, but mushrooms are still an underutilized natural resource as only a fraction of the annual natural production is harvested. The sensory properties of mushrooms have been examined globally in several sensory studies, but so far not in Finland. Additionally, there is still a need for further comparative research between species both as regards sensory profiling and hedonic liking assessed by larger consumer panels. The non-volatile and volatile compounds of mushrooms have been studied with instrumental methods without consideration as to human perceptions. The effects of the compounds on sensory properties of mushrooms has so far received limited attention, especially using appropriate statistical models.

The aim of the current work was to determine the sensory properties of wild edible mushroom species and to examine which volatile and non-volatile compounds would explain these properties. Finnish Agaricus bisporus (button mushroom), Cantharellus cibarius (chanterelle), Craterellus tubaeformis (trumpet chanterelle), Boletus edulis (porcini) and Lactarius camphoratus (curry milk cap) were the main species of interest. The sensory properties were examined with a trained panel using generic descriptive analysis and with consumers using projective mapping. The hedonic liking of mushrooms was studied with consumers. The volatile compounds were studied with an optimized headspace-solid phase microextraction gas chromatography method and their contribution to odor with gas chromatography-olfactometry. The nonvolatile compounds were measured with quantitative nuclear magnetic resonance spectroscopy. Univariate statistical methods such as analysis of variance and multivariate analysis methods such as principal component analysis and partial least squares regression were applied in each sub-study. These were used to determine the key compounds and attributes and to link the chemical and sensory datasets together.

The sensory properties of mushrooms could be linked to several chemical compounds. 1-octen-3-one and 1-octen-3-ol were linked to mushroom odor while 3-(methylthio)propanal was linked to the potato mash odor typical in Boletus edulis. High equivalent umami concentration (EUC) values and 5’- nucleotides were predictors of umami, while a high sugar-acid ratio predicted sweetness.

The tools and results of this thesis can be further used to develop mushroom products and as a starting point for a wider screening of the sensory properties and underlying chemistry in Finnish edible wild mushroom species.