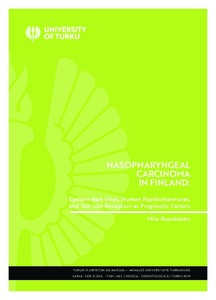 Nasopharyngeal carcinoma (NPC) is a malignant tumour arising from the surface epithelium of the nasopharynx. NPC is a rare cancer type in Northern Europe, and approximately ten new cases are diagnosed in Finland yearly. NPC carcinogenesis has been linked to Epstein-Barr virus (EBV) infection, but human papillomaviruses (HPVs) have also been found in NPC tumours. Presumably, the host’s innate immunological properties also have an impact on pathological processes. Toll-like receptors (TLRs) are transmembrane proteins, which recognize both microbial and host’s own structures released in tissue damage in order to regulate innate immunity. The expression of TLRs has been observed in many cancer types, but their actual function is still unknown. TLR stimulation may have both pro- or anti-tumoural effects.

The aim of this nationwide study was to evaluate NPC incidence, histological subgroups, provided treatments and their adverse effects, and outcome in NPC patients diagnosed and treated in Finland from 1990 to 2009. A total of 207 patients were identified from the Finnish Cancer Registry database during the 20-year study period. In addition, we examined the samples of 150/207 patients for the presence of EBV, high-risk HPVs, and TLR expression (TLR1, TLR2, TLR4, TLR5, TLR7, and TLR9), and compared the results with survival data. EBV was found in 62% and HPVs in 14% of the tumour cases, while 24% of the tumours were EBV/HPV-negative. The patients with EBV-positive tumours had the best 5-year survival rates, and the patients with HPV-positive tumours had a significantly better overall survival than those with EBV/HPV-negative tumours. Moreover, positive TLR7 expression was found to be an independent prognostic factor for favourable outcome.