Interoperating networked embedded systems to compose the web of things

Interoperating networked embedded systems to compose the web of things 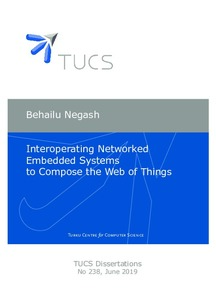 Improvements in science and technology have enhanced our quality of life with better healthcare services, comfortable living and transportation among others. Human beings are now able to travel faster, communicate across the globe in fraction of seconds, understand nature better than ever before and generate and consume huge amount of information. The Internet played a central role in this development by providing a vast network of networks. Leveraging this global infrastructure, the World Wide Web is providing a shared information space for such unprecedented amount of knowledge that is mostly contributed and used by human beings. It has played such a critical role in the adoption of the Internet, it is common to find people referring specific web sites as Internet. This adoption coupled with advances in manufacturing of computing elements that led to the reduction in size and price has introduced a new wave of technology, called the Internet of Things.

A rudimentary description of the Internet of Things (IoT) is an Internet that connects, not only traditional computing devices (with higher capacity and provide user interface) but also everyday physical objects or ’Things’ around us. These objects are augmented by small networked embedded computing elements that interact with the host via sensors and actuators. It is estimated that there will be Billions of such devices and Trillions of dollars of market value distributed in multiple aspects of our lives; such as healthcare, smart home, smart industries and smart cities. However, there are many challenges that are hindering the wide adoption of IoT. One of these challenges is heterogeneity of network interfaces, platforms, data formats and many standards that led to vertical islands of systems that are not interoperable at various levels.

To address the lack of interoperability, this thesis presents the author’s contributions in three categories. The first part is a lightweight middleware called LISA that address variations in protocols and platforms. It is designed to work within the constrained resources of the networked embedded devices. The overhead of the middleware is evaluated and compared with other related frameworks. The second set of contributions focus on higher level of system integration and related challenges. It includes a domain specific IoT language (DoS-IL) and a server implementation to support the proposed code on demand approach. The scripting language enables re-configuration of the behaviour of systems during integration or functional changes. The related server provides abstraction of the physical object and its embedded device to provide mobility services in addition to hosting the scripts. The last set of contributions are focused on either generalized architectural style design or a specific healthcare use case.

In summary, the overall thesis presents a highlevel architectural style that provides ease of understanding and communication of IoT systems, serves as a means for system level integration and provides the desired quality attributes for IoT systems. The other contributions fit in the architectural style to facilitate the adoption of the style or showcase specific instances of the architecture’s use. The performance of the middleware, the scripting language and the server including their resource utilization and overhead have been analyzed and presented. In general, the combination of the contributions enable inter-operation of networked embedded systems that serve as building blocks for the Web of Things - a global system of IoT systems.