RE-ACTING THE FUTURE : New Ways to Work. The Case of Reaktor

RE-ACTING THE FUTURE : New Ways to Work. The Case of Reaktor 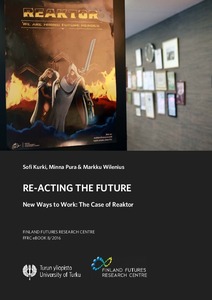 The Human Being and Value in the Sixth Wave (HUVA) project investigates organisations that are the harbingers of a new way not only to survive, but flourish in this new era of work. The main research case has been a Finnish IT-consulting company Reaktor that has pioneered a uniquely human-centric organisation model. Their approach to organising has resulted from a conscious, systematic effort to break from old ways of running a business, in order to create ways of organising that offer both high-level performance, quality in customer service, as well as worker satisfaction and fulfilment. It is due to these factors that Reaktor has been repeatedly chosen to be the best place to work, not only in Finland, but also in Europe.

In this report the study and its findings are presented. First, as motivation for the study, the writers contextualise the ongoing change into the historical shifts that have influenced organisations in the past, and then they try to give shape to the current emerging era with the demands, and opportunities that shape organising as a human endeavour. In chapters three to five the study is presented in detail: the research settings, and the results, as well interpretations of them. At the end of the report there are recommendations to other organisations that would like to learn from Reaktor’s way of operating