Utilisation of Wave Power in the Baltic Sea Region

Utilisation of Wave Power in the Baltic Sea Region 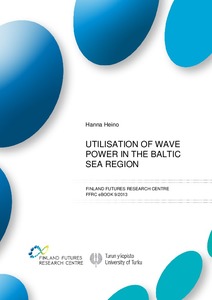 Renewable energy is the important issue at moment. It is hoped, that the renewable energy gives one solution to increasing energy demand and has also a positive effects on climate change. Wave energy is one source of renewable energy, which has not yet been exploited to a large extent. The potential of wave energy is estimated to be about the same as the economic potential of wind or hydropower in the world (10000-15000 TWh). The development of wave energy has been a difficult process though. It is more expensive to carry out the experiments and model testing off-shore and in harsh conditions than on shore. Wave energy has a potential as a truly renewable, sustainable energy source also in the Baltic Sea. Even though the main focus has been in the great oceans, a large portion of the world potential in wave energy resources are found in sheltered and calmer seas. In the Baltic Sea alone, the potential is calculated to be 24 TWh (Bernhoff et al. 2006). The wave power is suitable for local electricity production in coastal areas. It can also be an answer for energy security in the archipelago and coastal areas. This report is compilation of information from different sources. It starts from the global view about the ideas of energy use and demand, and then goes to the important role of the European Union. Next it takes a peak to renewable energy forms, before concentrating on wave energy. From wave energy it moves to Baltic Sea region, it characteristics and the regions potential to generate wave energy.