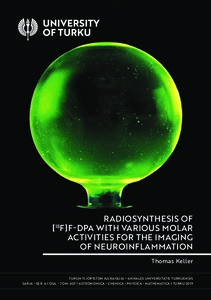 The use of radioisotopes as a means to non-invasively look into living subjects influenced both diagnostic and therapeutic medicine in the past century. Nowadays positron emission tomography (PET), employing short-lived radioisotopes such as carbon-11 and fluorine-18, is routinely used in nuclear medicine.

The aims of this thesis were to explore a new route by which radioactive [¹⁸F]fluoride could be converted into [¹⁸F]F₂. Furthermore an aim was to explore various synthesis routes for the production of [¹⁸F]F-DPA, a novel translocator protein (TSPO) specific tracer for activated microglia in neuroinflammation. [¹⁸F]F-DPA is an analogue of the routinely used [¹⁸F]DPA-714. The efficacy of the new tracer was investigated by small animal PET imaging of both healthy animals and a mouse model of Alzheimer’s Disease (APP/PS1-21). Various synthesis routes were developed for the production [¹⁸F]F-DPA, these gave the same product but with differing molar activities (Am), thereby enabling the study of the effect that varying Am has on the imaging of TSPO.

The new method employing vacuum UV photon illumination was successfully applied to synthesise [¹⁸F]F₂, and the resulting fluorine gas could be further used in the production of [¹⁸F]F-DPA. The [¹⁸F]F-DPA produced by the various synthesis methods differed only in the Am’s achieved. The nucleophilic labelling route resulted in [¹⁸F]F-DPA with a hundred-fold higher Am. The higher Am increased the uptake of the tracer to TSPO in the APP/PS1-21 mouse brain. It was found that [¹⁸F]F-DPA presented greater metabolic stability in vivo than [¹⁸F]DPA- 714. Furthermore, [¹⁸F]F-DPA was able to detect neuroinflammation in mouse brain even when it was produced with a low Am.