On the k-Abelian Equivalence Relation of Finite Words

On the k-Abelian Equivalence Relation of Finite Words 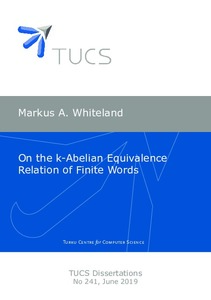 We survey known characterizations of the k-abelian equivalence of finite words from the literature and also introduce novel characterizations. For the analysis of structural properties of the equivalence relation, the main tool is the characterization by the rewriting rule called the k-switching. Using this rule it is straightforward to show that the language comprised of the lexicographically least elements of the k-abelian equivalence classes is regular. Further word-combinatorial analysis of the lexicographically least elements leads us to describe the deterministic finite automata recognizing this language. Using tools from formal language theory combined with our analysis, we give an optimal expression for the asymptotic growth rate of the number of k-abelian equivalence classes of length n over an m-letter alphabet. Explicit formulae are computed for small values of k and m, and these sequences appear in Sloane’s Online Encyclopedia of Integer Sequences.

Concerning infinite words, we mainly consider the (k-)abelian complexity function. We complete a classification of the asymptotic abelian complexities of pure morphic binary words. In other words, given a morphism which has an infinite binary fixed point, the limit superior asymptotic abelian complexity of the fixed point can be computed (in principle). We also give a new proof of the fact that the k-abelian complexity of a Sturmian word is n + 1 for length n < 2k, and 2k for n > 2k. In fact, we consider several aspects of the k-abelian equivalence relation in Sturmian words using a dynamical interpretation of these words. We reprove the fact that any Sturmian word contains arbitrarily large k-abelian repetitions. The methods used allow to analyze the situation in more detail, and this leads us to define the so-called k-abelian critical exponent which measures the ratio of the exponent and the length of the root of a k-abelian repetition. This notion is connected to a deep number theoretic object called the Lagrange spectrum.