Movement and habitat selection of the Eurasian red squirrel

Movement and habitat selection of the Eurasian red squirrel 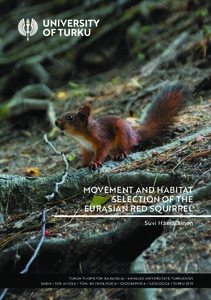 Movement ability and habitat selection of individuals are highly significant in determining the size of a population and impact the range and survival of the entire species. Thus, the conservation and management of animal species requires an understanding of the movement and habitat selection in various environments. Human-modified landscapes often differ from the natural environment of a species and can be highly fragmented. For forest-dwelling species, urbanized areas in particular can pose threats to movement, as forested areas are scarce and separated by roads and buildings.

In this thesis I study how an originally forest-dwelling species, the Eurasian Red squirrel (Sciurus vulgaris) is accustomed to live in human modified landscapes and move in urban and rural environments. The red squirrel is an arboreal mammal common in the boreal coniferous forests, but recent findings have shown the population declining in Finland. The movements of juvenile red squirrels are followed by radio tracking, and habitat selection, dispersal distance and movement patterns are examined as a response to landscape structures.

The results from the urban environment show that juvenile red squirrels do not avoid roads during their dispersal. In addition, mortality due to vehicles was detected low. Although red squirrels prefer areas with more trees available than in the surrounding urban landscape, they often use sites with only few trees. At the home range scale, the used area did not differ greatly from the habitat composition of the available landscape. Habitat use of juvenile red squirrels differed between the phases of dispersal, including settling in areas with less deciduous land cover type than in the natal area. Thus, red squirrels are well adapted to use urbanized areas and their movements are not inhibited by roads.

Most of the dispersing individuals compared potential sites for a home range before settling into the one they chose. However, in the rural study area, long-distance dispersing individuals did not compare potential sites and settled in the last site they visited. Landscape characteristics did not explain the number of revisits that individuals made to alternative sites, but the number of revisits declined with a site’s distance to the natal nest and the dispersal distance of individuals. The effect of landscape variables on decisions regarding where to settle was small, but surprisingly, in the rural area, juvenile red squirrels settled in sites with more built area compared to sites where juveniles only visited but did not settle in. The decision making during natal dispersal seems to be driven mainly by factors other than landscape characteristics and the search strategies vary between individuals and study areas.