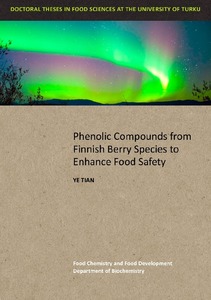 Food safety is of worldwide importance and in close relation to human daily life and wellbeing. Preservatives are often necessary to ensure the shelf life of food products. Despite the generally proven safety of synthetic food additives, there is an increasing demand for natural food preservatives due to the preference for natural foods by the consumers.

Fruits and leaves of berry plants contain a large group of phenolic compounds as secondary metabolites. These compounds have anti-microbial and anti-oxidative functions. There is potential to produce natural foodpreservatives using berry and leaf extracts of different berry species. The aims of this research were: 1) to determine phenolic profiles of food grade water-ethanol extracts of leaves and fruits of thirteen Finnish berrybearing plants; 2) to evaluate their anti-oxidative activities and antimicrobial effects on foodborne pathogens; 3) to study the influence of genotype (cultivars) and annual variation on phenolic profiles of berries among 21 cultivars of Ribes nigrum.

The total content of phenolic compounds was significantly higher in aqueous-ethanol extracts of the leaves than in the corresponding extracts of the berries (8–71 vs. 54–786 mg/100 mL). Sea buckthorn leaves had the highest total content of phenolics (606–786 mg/100 mL) due to the abundance of ellagitannins. In the leaf extract of lingonberry, β-p-Arbutin accounted for over 40 % of the total phenolics (271 mg/100 mL), followed by (+)-catechin, procyanidins, and quercetin glycosides. The leaf extract of bilberry was rich in caffeoylquinic acid (80 % of the total content of phenolics). Anthocyanins formed the most dominant group of phenolic compounds in the dark-skinned berries, whereas sea buckthorn berries contained mostly isorhamnetin glycosides.

There was considerable variation in both anti-oxidative and anti-bacterial activities among the extracts with strong correlations with the total content of phenolics. Flavonoids correlated strongly with the activities measured with Folin-Ciocalteu, oxygen radical absorbance capacity (ORAC), and total radical trapping antioxidant parameter (TRAP) assays. The correlation was especially strong between the anti-oxidative activity and the content of proanthocyanins (procyanidin dimers and trimers), flavan-3-ols ((+)-catechin and (-)- epicatechin), and glycosylated flavonols (quercetins). Anthocyanins and nonflavonoid phenolic compounds correlated highly to the activity of scavenging DPPH radicals. Non-flavonoid phenolic compounds had major contribution to inhibition of the growth of some bacterial species, example of which is the correlation between content of ellagitannins and inhibitory capacity against Staphylococcus aureus and Bacillus cereus strains.

Eight extracts of fruits and leaves were chosen for fractionation using Sephadex LH-20 column, and the anti-oxidative and anti-microbial activities of the fractions were further studied in order to pinpoint the major phenolics contributing to these activities. The results suggested that ORAC activities of quercetin glycosides might decrease with increasing number of sugar moieties. For mono-glycosylquercetins, the nature of sugar moieties might also influence the capacity of quenching peroxyl-radicals. Compared to S. aureus strains, Escherichia coli showed a higher resistance to phenolics in the fractions studied.