The Use of digital games to enhance the physical exercise activity of the elderly : a case of Finland

The Use of digital games to enhance the physical exercise activity of the elderly : a case of Finland 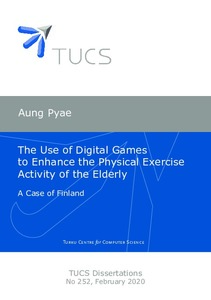 According to the World Health Organization (WHO), population ageing is a global phenomenon, which brings both challenges and opportunities for society. The current longer expected lifespan can create opportunities for the elderly to contribute in many ways to their families and communities. However, it greatly depends on their quality of life, which is affected by many factors, including physical and functional health, social well-being, and cognitive abilities. The WHO (2012) states that physical health is one of the indicators for the elderly’s quality of life, and it declines with increasing age. Participation in regular physical exercises can help the elderly improve their physical and mental health, and this has been aided by the use of modern technologies to promote the elderly’s physical and functional health.

Of these latest technologies, digital games have shown promise to improve and enhance the elderly’s physical activities through fun and engaging gameplay. The literature highlights that some commercial games in the market (e.g. Microsoft Kinect- Sports and Nintendo Wii Sports games) have the potential to improve the elderly’s physical health such as gait, balance, and fall prevention. However, researchers argue that these commercial games are not designed specifically for the elderly and their physical exercise activities. They state that most commercial games are not user-friendly for the elderly whose functional and physical abilities are limited due to their advanced years. The literature points out that more studies need to be undertaken to understand the usability and usefulness of digital games for physical exercise activities so that game designers can create elderly-friendly digital games in the future. In Finland, the government has been focusing on promoting healthy ageing and increasing home care services for the elderly. In recent years, Finnish researchers have used digital games to promote older Finns’ healthy and active ageing. The existing literature, whilst showing the potential of digital games for elderly Finns’ physical health, also acknowledges further research is needed particularly in the context of Finland.

Thus, in this study, we aimed at investigating digital games to specifically assess their applications for older Finns’ physical activities, focusing on the quality of users’ experiences, and their reported ease of use and perceived usefulness. We used the mixed methods approach, which applies both qualitative and quantitative research methods. The study design included four stages: requirements gathering, analysis and design, prototyping, and evaluation. Firstly, we conducted pre-studies to elicit users’ requirements. This was followed by the analysis of the resulting data to identify trends and patterns, which fuelled ideas in the brainstorming game design and development phases. The final product was a digital game-based physical exercise called the Skiing Game. We then evaluated the Skiing Game in Finland with 21 elderly Finns (M=7, F=14, Average Age =76). By using questionnaires, observation, and interviews, we investigated user experiences, focusing on the game’s usability, and usefulness for enhancing the physical activity and wellbeing of the elderly. We also conducted a comparative test of the Skiing Game in Japan with 24 elderly Japanese participants (M=12, F=12, Average Age = 72) to further understand non-Finnish elderly users’ experiences.

The findings from the usability study of the Skiing Game in Finland demonstrated that elderly Finns had a positive experience in the gameplay, and their motivation was noticeably high. It also confirmed that elderly Finns have a genuine interest in digital game-based exercises and strong intentions to play digital games as a form of physical exercise in the future. Although prior to the study most of them had negative views and misconceptions about digital games, after the gameplay their attitudes were decidedly positive. They acknowledged that whilst playing digital games could be an alternative way of exercising for them their use would primarily be when they don’t have access to their usual non-digital physical exercise. The Japanese usability of the Skiing Game showed that the elderly Japanese people also had positive user experiences in playing digital games, and also intend to use them in the future. Similarly, after playing the game they reported that their attitudes towards digital games become positive, and indicated playing digital games could be an alternative way of exercising. Although the comparison of the two studies suggests that the elderly Finns had relatively more positive experiences whilst playing the Skiing Game, compared to their Japanese counterparts, in general, both groups had a positive experience in the gameplay and showed interest in digital games as an alternative exercise.

Based on the usability lessons learned from these two studies, recommendations for practitioners and designers regarding improvements in game design and development are made in this report. Implementing these modifications into future designs and further development of digital games for the elderly will improve their commercial viability and user uptake. The findings from this study can provide valuable insights, particularly for Finnish policymakers and healthcare practitioners who are keen to introduce digital games into the aged-care sector in Finland. The studies have also provided valuable insights into the optimal methods for introducing Finnish digital games to international markets, in particular, digital games tailored specifically for the physical exercise needs and motivations of the elderly. By taking into consideration the limitations of the study, we provide our future studies and further improvements of the game to be conducted.