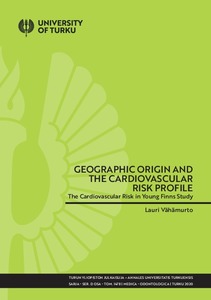 Background: Since the 1940’s, coronary heart disease (CHD) has been recognized as a major cause of death in the developed countries. Men born in eastern Finland were found to have internationally high CHD mortality in the late 1960’s. As a result, the “North Karelia Project” was launched, aiming to decrease CHD risk factors especially in the high risk areas. Since then, CHD mortality rates have decreased significantly in Finland with over two thirds of the decline explained by favourable changes in modifiable risk factors. Despite the overall reduction, regional differences in the rates are still seen. Although regularly studied, the current regional differences in Finland in CHD risk factors and surrogate markers subclinical atherosclerosis are thoroughly investigated.

Participants and methods: This thesis uses data from the Cardiovascular Risk in Young Finns Study which is a prospective multicentre cohort launched in 1980. CHD risk factors have been measured from the participants repeatedly since the baseline study. Carotid IMT was first measured in 2001 from the participants and echocardiography was included in 2011, when over 57% of the original study population participated in the latest follow-up study at the age of 34–49.