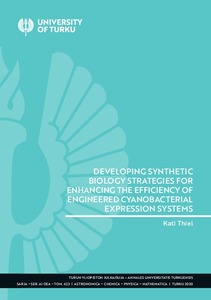 Cyanobacteria are unique prokaryotic microbes performing oxygenic photosynthesis. They have inherent capacity of the direct conversion of solar energy, CO2 and water into carbonbased compounds. Scientists’ increasing abilities to engineer cyanobacterial cells makes them an attractive next-generation biotechnological host for sustainable production systems, independent of biomass-derived substrates. However, in order to develop commercially viable systems, the strategies for rational strain engineering and enhanced electron and carbon fluxes towards the specified target compounds should be improved by synthetic biology approaches. To date, the development of robust engineering tools for solar-driven cyanobacterial production systems has lagged considerably behind compared to more common heterotrophic microbial production platforms such as Escherichia coli and Saccharomyces cerevisiae. The focus of this thesis was to develop synthetic biology tools and strategies for cyanobacterium Synechocystis sp. PCC 6803 for efficient and predictable strain engineering and pathway design.

The new synthetic biology tools established in this study include the characterisation of thirteen different ribosome binding sites (RBS) instrumental in adjusting the translational efficiency of synthetic pathways in Synechocystis. Nine different integration sites, both in the chromosome and endogenous plasmids, were validated for parallel and alternative expression of the gene of interest. Two expression vector backbones were designed and constructed for parallel and alternative expression strategies. A set of quantitative reporter markers were deployed as analytical tools which allowed the comparative evaluation of the expression of Synechocystis. An assembly system was adapted in Synechocystis for an accelerated pathway design and for a construction platform for expression cassettes or operons. In addition, a series of engineered Synechocystis strains were constructed to investigate whether the redirection of electron and carbon fluxes could enhance the photosynthetic electron flux towards the target end-product. This was accomplished by deleting the competing native flavodiiron protein–dependent electron transfer pathway and introducing an alternative sink for the excited electrons using sucrose as an end-product for electrons. This investigation revealed that a significant proportion of the electrons could be rescued and redirected towards the downstream biosynthetic reactions resulting in improved production efficiency. Furthermore, the potential use of acetate as supplementary carbon source for improving the cyanobacterial production system was addressed, and revealed to have a clear advantage for growth, especially under low light conditions.

In summary, the results presented in this thesis provide new synthetic biology tools and engineering strategies for promoting the development of cyanobacteria-based cell factories; they also provide a better understanding of the endogenous regulatory systems in Synechocystis, as a part of the progress towards future biotechnological solutions that will generate sustainable carbon-based products directly from CO2.