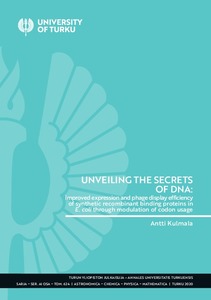 Recombinant binding proteins are becoming increasingly important in various applications, including diagnostics, basic research, and therapeutics. Therefore, the demand for recombinant binding proteins will increase in the future, making it essential to enhance protein production methods. One approach is to improve heterologous expression, in which proteins are produced outside their native hosts. scherichia coli has been a workhorse of heterologous expression for decades due to easy cultivation, cost efficiency, well-known genetics, and compatibility with phage display. However, the production of heterologous proteins in E. coli can sometimes be very difficult. Often the problems in heterologous expression are related to codon usage, which works as a control mechanism of protein translation, especially in bacteria. Different organisms do not use codons in the same manner, and in some cases, a heterologously expressed gene can include codons that are rarely or too frequently used in E. coli, which can disturb the codon usage derived control of translation. Many studies have reported improved yields of heterologous proteins produced in E.coli when the codon usage of the heterologous gene has been recoded to suit better for E. coli. Most often, recombinant binding proteins used in the previously mentioned applications are not native proteins of E. coli either, and many times their production or phage display in E. coli can be very cumbersome. In this thesis, we aimed to improve expression and phage display properties of two essential recombinant binding proteins in E. coli through modulation of codon usage. One binding protein was an antibody fragment called fragment antigen binding (Fab) and another artificial recombinant binding protein called Designed Ankyrin Repeat Protein (DARPin). In the first publication, the expression and phage display efficiency of a human anti-digoxigenin Fab fragment was improved by codon harmonizing the selected segments of the Fab fragment gene. In the second publication, expression and secretion properties of Fab fragments were improved by selecting enhanced signal sequence variants from PelB signal sequence libraries, which included only codon changes. In the third publication, the signal sequence libraries were used to enhance Sec dependent phage display of an anti-GFP DARPin and a DARPin library.