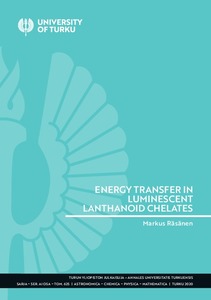 Luminescent lanthanoid complexes are widely utilized, especially in the medical diagnostics. The complexes have been much studied and ligands with high quantum efficiency have been developed for different lanthanoid ions and for different applications. However, the present ligands are not applicable for all applications, for example for biological imaging, which would require excitation by visible light, water solubility and stability in the aqueous environments. The development of ligands for these applications would require a better knowledge of the fundamental processes in lanthanoid luminescence. In spite of numerous studies, additional information is still needed, at least regarding the energy transfer in chelates. The role of different energy states in the energy transfer processes, especially, would require more studies.

The aim of this thesis is to provide new information about the energy transfer phenomenon. The results show that the roles of the ligand energy states in the energy transfer processes are depended only on their relative positions with respect to the receiving Ln(III) states and the energy transfer rates between the states but not on the nature of the energy states. The determination of the singlet and intraligand charge transfer state energies with the help of absorption and emission spectra is an important result, which helps to show that the energy back-transfer takes place from Ln(III) to the emittive intraligand CT state. In addition, the method for the determination of the stability constant utilizing the luminescence intensity was developed. According to this work, it seems that the absolute values of the ligand energy states should not be taken into consideration in the ligand development but rather the information provided by the (deconvoluted) fluorescence and phosphorescence emission bands of the ligands.

In addition, new efficient ligands and their complexes with Eu(III) and Tb(III) have been studied. These can be exited by visible light and used in aqueous media.