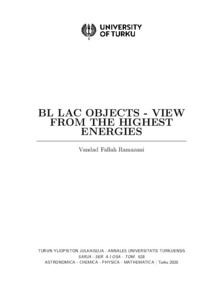 Relativistic jets launched by a super-massive black holes are among the most extreme particle accelerators in the Universe. BL Lac objects host a relativistic jet that points very close to our line of sight. They are the most numerous sources in the extragalactic very-high-energy (VHE > 100 GeV) gamma-ray sky and have been suggested to be possible sources of astrophysical neutrinos. Additionally, due to their high brightness, they can be used to study many fundamental problems like the properties of the Universe between us and them. However, in order to do so, we need to know the intrinsic spectrum of many BL Lac objects and the emission mechanisms that cause their variability. In this thesis, some of the long-standing questions about BL Lac objects are addressed using multi-wavelength data.

With the aim of increasing the number of the BL Lac objects in the VHE gamma-ray sky, a prediction method needs to be developed. As an outcome, a candidate list of VHE gamma-ray emitting (TeV) BL Lac objects is provided for further observations. Three of these candidates (S2 0109+22, TXS 0210+515, and 1ES 2037+521) were followed by VHE gamma-ray observations. I performed a detailed study of these three sources. In archival data, they had di_erent classi_cations. S2 0109+22 was classi_ed as an intermediate synchrotron peaked source, while the other two were identi_ed as extreme high synchrotron peaked source (EHBL) candidates. Only a handful of both have been detected at VHE gamma rays. S2 0109+22 was detected in a aring state, and during this period the peaks of its spectral energy distribution (SED) moved to higher energies. The two other sources showed no variability and our study con_rmed them as EHBLs.

I have also studied the emission models of TeV BL Lac objects. I performed a detailed study of _ve TeV blazars by applying a two-component model which takes into account the observational constraints in the radio and optical bands. I found that such a model can reproduce the observed SEDs. Unlike one-zone models, the model does not require very low magnetic _eld strengths and it does not ignore the radio part of the SED.