Around the Domino Problem – Combinatorial Structures and Algebraic Tools

Around the Domino Problem – Combinatorial Structures and Algebraic Tools 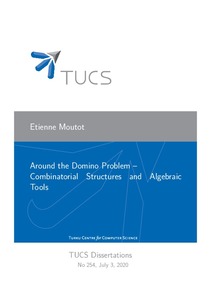 Given a finite set of square tiles, the domino problem is the question of whether is it possible to tile the plane using these tiles. This problem is known to be undecidable in the planar case, and is strongly linked to the question of the periodicity of the tiling. In this thesis we look at this problem in two different ways: first, we look at the particular case of low complexity tilings and second we generalize it to more general structures than the plane, groups.

A tiling of the plane is said of low complexity if there are at most mn rectangles of size m × n appearing in it. Nivat conjectured in 1997 that any such tiling must be periodic, with the consequence that the domino problem would be decidable for low complexity tilings. Using algebraic tools introduced by Kari and Szabados, we prove a generalized version of Nivat’s conjecture for a particular class of tilings (a subclass of what is called of algebraic subshifts). We also manage to prove that Nivat’s conjecture holds for uniformly recurrent tilings, with the consequence that the domino problem is indeed decidable for low-complexity tilings.

The domino problem can be formulated in the more general context of Cayley graphs of groups. In this thesis, we develop new techniques allowing to relate the Cayley graph of some groups with graphs of substitutions on words. A first technique allows us to show that there exists both strongly periodic and weakly-but-not-strongly aperiodic tilings of the Baumslag-Solitar groups BS(1, n). A second technique is used to show that the domino problem is undecidable for surface groups. Which provides yet another class of groups verifying the conjecture saying that the domino problem of a group is decidable if and only if the group is virtually free.