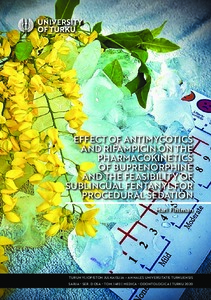 The aim of the fourth study was to evaluate the efficacy and safety of a sublingually administered fentanyl tablet in patients having colonoscopy. Patients often experience colonoscopy painful and unpleasant. Intravenous sedation increases the costs of colonoscopy significantly because patients need monitoring during sedation and recovery. The use of the sublingual administration route could offer a cost-effective alternative to intravenous sedation.

This study showed that 100 micrograms of sublingual fentanyl was ineffective for the treatment of pain during colonoscopy. Nonetheless, it was observed that very few procedures had to be interrupted and the pain that patients experienced was mostly moderate. This raises the question of whether we should treat patients for anxiety and distress instead of pain.