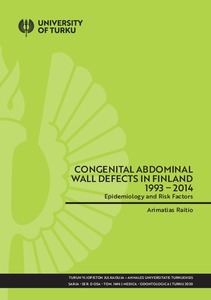 Congenital abdominal wall defects are a group of malformations among which gastroschisis and omphalocele are the most common. In omphalocele, abdominal organs are herniated through an open umbilical ring and the defect is covered by membranes. Omphalocele is often associated with other severe anomalies and reasonably high mortality. Gastroschisis, on the other hand, is an open abdominal wall defect lateral to the umbilical cord. Contrary to omphalocele, it carries a far better prognosis. For unknown reasons, the prevalence of gastroschisis has increased dramatically worldwide over the last decades.

The first aim of this study was to assess the national prevalence, mortality, and pregnancy termination rates of both gastroschisis and omphalocele, and to identify associated anomalies. In the second phase, the aim was to identify potential maternal risk factors for both abovementioned anomalies. The analysis is based on several national registries, the majority of which are upheld by the Finnish Institute for Health and Welfare.