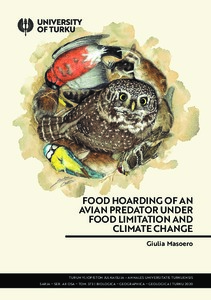 Hoarding behaviour (storing food for later use) has evolved to reduce the risk of starvation when resources are scarce. In this thesis, I studied the food-hoarding behaviour of Eurasian pygmy owls (Glaucidium passerinum) under spatiotemporally varying environmental conditions. I investigated differences between age and sex classes, the effect of intra-specific competition, predator responses to the abundance of the main prey, and the effect of climate on the behaviour. The data were collected starting in 2003 in western Finland, where the abundance of voles fluctuates in three-year population cycles. The number of stores per year and the biomass of prey items stored increased with vole abundance. Females and yearlings had larger and heavier stores than males and adults, respectively. At times of low vole abundance, adult owls stored more small birds and fewer small mammals than yearlings. Females stored more small mammals than males, and showed a tendency to store fewer birds. The numbers of yearlings of both sexes and adult females increased with increasing vole abundance. Owls were less likely than expected to have a neighbour of the same class (sex or age) when the main prey was abundant, suggesting high sex- or age-specific competition. Food stores, however, were mostly larger when the nearest neighbour was of the same sex. In years of low vole abundance, increasing conspecific density reduced the total prey number stored by an owl, suggesting a high cost of competition. The thesis also reveals a strong effect of autumn and winter climate on food-hoarding pygmy owls and on the quality of the stored food. Pygmy owls may be partly able to adapt to climate change by delaying the initiation of food-hoarding. Numerous weather variables nonetheless affect their hoarding behaviour and the perishability of the cached food. Rotten food may be of poor quality and may be connected to a lower recapture probability. In female owls, rotted food hoards, often consumed, are linked with a lower future recapture probability, presumably indicating that they either die or emigrate permanently from the area. Detailed knowledge of age- and sex-related differences in hoarding behaviour under fluctuating abundances of the main prey can thus provide a fundamental tool to better understand the dynamics of a predator population and its response to climate change.