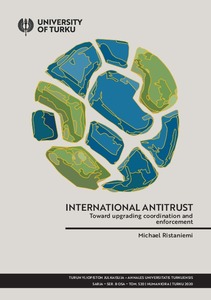 What is this book?
This is an article-based doctoral dissertation in law, which forms a part of the University of Turku Doctoral Programme in Law. Its theme concerns the international and cross-border dimensions of competition law and policy – referred to as international antitrust. The articles on which the book is based have been published between 2014 and 2020.

Why is the international antitrust world order so problematic?
The problems of international antitrust stem from its complexity and fragmentation. There is no supranational legislator, nor are there clear intergovernmental binding agreements. Instead, there are more than 130 sets of national competition legislation, complemented by bilateral trade agreement chapters on competition and non-binding soft law. This results in significant overlaps and gaps, which create inefficiencies. In addition to general negative externalities and inefficiencies, the problems of international antitrust are often most suffered by smaller and less developed nations.

What are the main reasons for not having a more coherent system?
Competition law does not have a universally agreed goal or objective. This, in itself, leads to difficulties in creating a harmonious international system of competition law. Behind this formalistic reason are the differing needs of nations. Some nations are net exporters, while some are not. Some might have wellfunctioning markets, while others do not. Whether or not part of competition law, public interest considerations nevertheless also play a role. Other reasons exist, too: major economic powers are reluctant to compromise, and intergovernmental trust still needs to be improved. Hence, the most typical manifestation of cooperation is non-binding in nature and takes place via transgovernmental networks.

How could international antitrust be developed?
International antitrust could benefit from improved inter-agency coordination and by reducing the disparity in the quality of enforcement across agencies. The ICN and other fora are integral in fostering the trust and dialogue needed to improve such coordination. Codified competition law currently exists quite broadly around the world. However, in terms of enforcement, there is an enormous disparity between those competition authorities with greater experience and resources and those with less of both.

A realistic idea to mitigate this disparity would be to better understand the potential of private firms to act as partners of officials in competition enforcement. Inducing firms to take steps toward more efficient self-enforcement could improve both the functioning of markets and competition enforcement. Such shared governance could be possible, should policymakers better utilize tools to incentivize firms to take their compliance work seriously. This would de facto extend the reach of enforcement, as firms would self-enforce with more rigor.

Further, a renewed interest in multilateral, structured resolutions should be encouraged. The realities of international antitrust have changed since the past true attempt in the early 2000s. In particular, the number of competition authorities has increased drastically, as has the amount of competition law they enforce. Also, many more nations nowadays possess substantial experience in international cooperation in competition matters than ever before, which has led to an arguably higher level of trust. The time may be right to consider multilateral initiatives with a stronger level of commitment than those based purely on voluntary cooperation, an example of which is a so-called “opt-in” model. Initiatives aiming at streamlining procedural matters and preventing cross-border anticompetitive conduct could and should be considered – ones that would, however, not result in a transfer of nations’ sovereignty over their domestic markets.