Fadolmidine – an alpha2-adrenoceptor agonist for spinal analgesia : analgesic effect and safety in preclinical in vivo models

Fadolmidine – an alpha2-adrenoceptor agonist for spinal analgesia : analgesic effect and safety in preclinical in vivo models 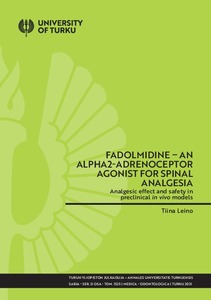 This study is a part of the nonclinical development and characterization of fadolmidine for spinal analgesia. These in vivo studies revealed that fadolmidine is a potent analgesic after epidural and especially after i.t. administration in rats and dogs. At analgesic doses in rats/dogs, i.t. fadolmidine induced minor effects on blood pressure concomitantly with a decrease in heart rate. At high spinal doses, fadolmidine induced sedation, hypothermia and a mydriatic response in rats. In contrast, two established α2-adrenoceptors agonists, dexmedetomidine and clonidine, exerted those adverse effects already at analgesic doses. After i.t. dosing, the concentration of fadolmidine in plasma was very low in rats. With i.t. infusion, fadolmidine achieved a good analgesic effect without evoking cardiovascular side effects, e.g. hypotension in dogs. Co-administration of i.t. fadolmidine with a local anaesthetic bupivacaine enhanced sensory-motor block in rats and dogs. This interaction of the analgesic effect was synergistic.

This study provides novel data about pharmacological properties of fadolmidine for further development for use in spinal analgesia.